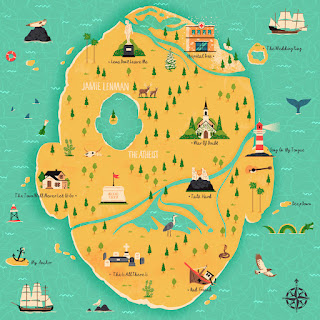 Regular readers of this humble blog will know that I'm a big fan of Jamie Lenman and believe him to be one of this generation's finest (and yet most underrated) songwriters. The clamour and vibe around this album is that it a new direction and sound for the former Reuben frontman but I have to say that, although it is an outstandingly high quality album, I don't think it is that big a departure from previous releases. Maybe some of the songs are more radio friendly but he's always had that in him and anyone who says otherwise just hasn't been paying attention. Anyway, let's get on with the review shall we? 'The Atheist' by Jamie Lenman goes a little something like this....

Opening with 'This Is All There Is' we get welcomed to the album with the withering line "You really think that there's a heaven and hell? Well maybe there's a planet Krypton as well", attacking the fantasy world that is organised religion over spicy and punchy powerhouse grunge riffs. Where else will you get service like that? Superb early single 'Talk Hard' is up next advocating for finding your voice and making your point heard with a melody that is like Weezer with a slightly sharper edge softened only by Lenman's encouraging arm around your shoulder. With every listen 'Hospital Tree' becomes both a harder and more beautiful listen as it takes the simple A&E Christmas decoration and creates a heartfelt and Christmassy ode to the NHS.

The swaggering riffs of 'Deep Down' is the sound of a man realising that he doesn't have space or time in his life for certain people while 'Lena Don't Leave Me' is one of the most honest and open love songs I've ever heard - the line "Your half of all I am, I'm an uncompleted man" slays me every time. The itchy acoustic strumming of 'My Anchor' allows Lenman to show off the richer end of his vocal range before the bass plod and spoken word track of 'Bad Friend' takes me back to those rare tender moments of Reuben like 'Boy' and 'Good Luck' which bring tenderness and vulnerability to a new level. There is a more frantic energy to 'Song On My Tongue' which explores Lenman's constant battle with the music world that he has never fully fitted in to as the thundering hooves of drums and scratchy guitars really get under your skin.

'This Town Will Never Let Us Go' has a sweeping sadness to it with strings swooning in the background but this is beautifully juxtaposed by the raw piano and vocal ballad of 'Wedding Ring' which is so simple and so perfect that I could listen to it on a loop for hours. The album comes to a clattering climax on 'War of Doubt' which lumbers and lurches in to life before slowly evolving in to an epic and uplifting melody punctuated by a saxophone of all things. 'The Atheist' is an insanely good album and probably the most at ease I have ever heard Jamie Lenman with his own songwriting but the real treat here is just how honest, open and on point the lyrical content is at a time when the world is drowning in lies, fake news and bare face bullshit. Bravo, mon brave.