Lizards From Venus - Did You Forget To Take 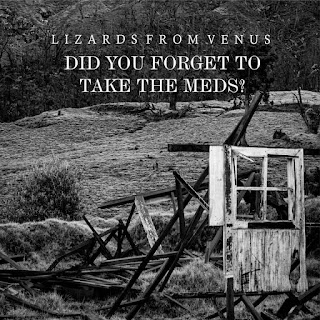 Release Date: Out Now
I don't get much music from Costa Rica but even less from Venus and the Lizard music scene has been deathly quiet of late so this EP has ticked a number of boxed before I've even listened to it. Lizards From Venus are a Costa Rican quartet and their new EP, 'Did You Forget To Take The Meds?', is something a little bit special. Opening track 'Attack' has a Latin energy to the opening bars before an 80s inspired song unfolds with influences from the Shoegaze scene, early releases by the Smiths and a little bit of grunge to spice things up a little. 'SXTY' is up next with a menacing bass and guitar chug that feels like a menace approaching before an industrial beat joins in that reminds me of early Incubus, Faith No More and Shihad in all the best ways.
'Paroxetine' is named after an anti-depressant and the deep vocals matched with the sludge of the guitars and bass feels like depression trying to invade the furthest corners of your soul before the chorus comes along to dispell that darkness. The EP finishes up on 'Light' which lifts the mood a little with some David Bowie meets the Fall vibes as the guitars sprawl out over the horizon, chasing the sunset all the way. I don't know how the Costa Rican music scene supports talent but I think Lizards From Venus deserve a little leg up to get them out to a bigger audience so that their music can be heard and enjoyed by more people - but only people who like sludgy guitars, powerful drums and moodscapes full of darkness and contours.
More information: https://www.facebook.com/lfvcr