Deux Furieuses - Bring Down The Government 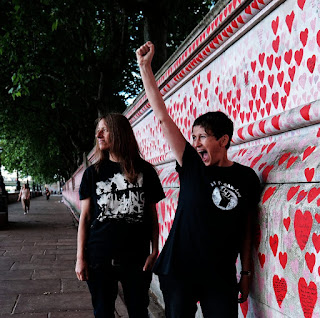 They might be busy touring as part of Brix Smith's band but that hasn't stopped everyone's favourite politico-agitators from knocking out a new single with the brilliant timed title 'Bring Down The Government' dropping in to my inbox this week. This is three and a half minutes of abrupt and angry tones as spiky guitars duel with punchy drums like two sides of the House of Commons spitting in retaliation. Ros Cairney's vocals are full of barely repressed venom but the steely determination to make a point and stick the needle in to the lying Tory fat cats is ever present. If everyone could get behind this song and get it in to the charts and on to mainstream radio then it would be another nail in a coffin that needs burrying about 60 feet underground under a pile of very heavy rocks and a nuclear power station with a leak.