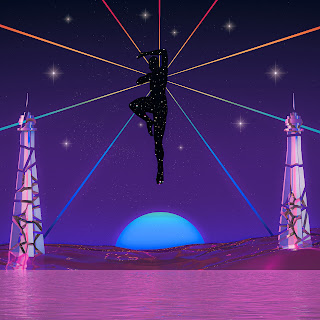 Coming at you hot straight out of Louisiana comes trio Seratones with their frankly wondrous new album 'Love & Algorhythms' so you'd better listen up and listen good. The party is started with 'Two Of A Kind', introducing the album with A.J. Haynes' sweet vocal backed by a choir of angels and a throbbing, pulsating synth bass line - it's as classy an opening track as you're likely to hear in 2022. 'Pleasure' picks up the tempo and moves in to Goldfrapp territory with those synths and sultry yet soulful vocals beckoning you on to the dance floor. The confident strut of 'Love & Algorhythm' is a more contemporary track which wouldn't be out of place on a Janelle Monae album as the smooth melodies combine brilliantly with a beat that gets straight in to your hips.

Recent single 'Good Day' is as joyous and free as the first time I heard it while 'I'll Be' mixes soft soul with a funky disco beat to create something so pure that it's hard not to fall in love with it. There's a poetic spoken word interlude on 'Evidence' before 'Get Free' provides the most hard hitting moment of the album with a superb drum groove being met head-on by A.J. Haynes' fierce call-to-arms of a vocal. The sumptuous 'Dark Matter' is a modern take on Shirley Bassey and could easily be featured as the next Bond theme or at the very least a cinema soundtrack.

The winner of the best song title of the year so far goes to 'Get Your Shit Together, Babe' which bubbles and pops with an energy that is somewhere between Morcheeba and the Noisettes sprinkled with some gorgeous keys. As we approach the climax of the album, 'Power Of Your Light' comes wandering in with a glint in the corner of its eye, turning a lounge soul number up to eleven and really revelling in the freak out. As the final track 'High' comes around with acoustic riff and breathy vocals you get the feeling that you're being transported off to another place and time by the trippy vibes. Seratones have a huge amount of soul and some wicked melodies but it's the ingenuity and unbridled creativity that really seals the deal with this album and I thoroughly recommend that you spend some time getting to know it.