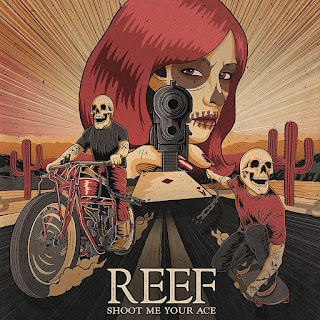 Over the years, Reef have always been there or there abouts as they dabbled with indie, Britpop, funk, gospel and even a bit of folk but at their heart they've always been a rock band and this new album realises the purity of that offering. 'Shoot Me Your Ace' is a triumphant, unapologetic and glorious album that takes influences from throughout the history of rock music and proves, once and for all, that Reef have their own special place in that timeline.

The album opens with the chug of the title track and, honestly, 'Shoot Me Your Ace' is as vital and pulsating an album opener as you could hope for. When the pre-chorus starts rattling along you can almost smell the gasoline in the air and when those layered guitars really start stacking up then the hairs on the back of your neck stand to attention. 'When Can I See You Again' harks back to the band's 'Glow' album with lines like "when I wake up and you are naked in your make up" delivered atop a rolling slice of Americana delivered with a Glastonbury accent. Perhaps my favourite track on the album is 'Refugee' which finds frontman Gary Stringer in brilliant, soulful vocal form as the band create a Rolling Stones-esque swirl of a noise around him singing "I am a refugee, a reckless heart being set free".

On 'Best Of Me' there are elements of the Who as the boys rattle along with a bluesy vibe but with an uplifting melody keeping the energy just right. Similarly, 'Wolfman' is a primal release of a song with a snarling guitar line courtesy of Jesse Wood that makes you want to strut in to the nearest bar and cause some havoc. Jack Bessant's legendary bass playing introduces 'Hold Back The Morning' before Stringer's vocal joins in and soon the rest of the band kick in to create a Lynyrd Skynyrd meets Black Sabbath sound.

'Right On' is a sweeter, more gentle song penned by Bessant which provides a moment of respite but still features a scything guitar and the kind of vibe that makes you want to drive to the coast just to watch the sun rise. That bass and vocals intro features again on 'Everything Far Away' which broods and builds in to the kind of song that could easily feature on a movie soundtrack before exploding in a blur of gravelly vocals and crashing drums. The strutting Stringer is back on the funk infused 'I See Your Face' which is as close as the band come to their original sound from debut album 'Replenish' (can a band be their own influence if they hang around long enough?). The album closes out on six minute epice 'Strange Love' with brings back that Rolling Stones sound (I mean, Jesse Wood must have it in his genes, right?) with a gloriously loose jam before one of the longest outros you've ever heard. Reef aren't back, they never went away, they were just doing their thing until the time was right and the people needed a rock album to really get off to. This is that album.