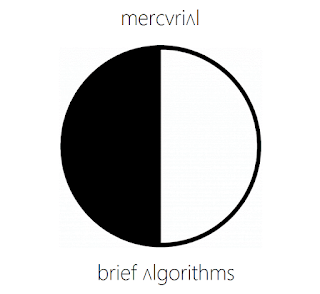 When I recieved this album from Mexican band Mercvrial (on CD, 12" and streaming link, no less), I wasn't sure what to expect but it certainly wasn't brilliant collection of moody post-punk songs full of style, panache and big ol' hooks. 'Brief Algorithms' gets underway with 'Be That Someone' and you'll be hard pushed to find a more instant opening track on an album this as the bass throbs, the drums punctuate and the guitars ping around like Johnny Marr in peak form. 'Dark Stars' has the feel of an early U2 track with urgent, searing guitars and vocals echoing in from the shadows with real menace and intent. 'Look Inside' completes the opening trio of songs and the Nick Cave-esque vocals mixed with moody melodies sounds like a song from the late 80s that never saw the light of day due to musical differences.

Influences from Echo & the Bunneymen to the Chameleons can be heard on tracks like 'I'll Get You Home' and 'Dance In The Dark' while 'Hail Of Arrows' has one of the best punk bass lines outside of a punk song you'll hear in the near future with echoes of Reverend and the Makers when the song gets going. On 'I've Never Liked You Anyway' there are middle eastern vibes to the melodies but those guitars ring out like you're exploring some illegal underground venue in early 90s Manchester, following the throbbing rhythm section through a maze of abandoned storage units. 'Matilda Mother' takes us back to bands like the Doors or the Eagles with slathered keyboards adding a layer of mysticism to proceddings before 'Hiroshima Mon Amour' (best title of the year so far) almost goes 80s pop on us with a Simple Minds-esque vibe.

'Cats of Cavtat', unpredictably, is a song about cats in a small Croatian village near Dubrovnik but it's still a brilliantly urgent slice of shimmering, shaking music that would fit brilliantly in to any John Hughes soundtrack (as would the whole album, to be fair). The collections climaxes with 'Waiting on a Miracle' which bubbles and bounces with electricity before the chorus explodes with hooks that New Order would be proud to call their own (and I'm not just saying that because the bass is so reminiscent of Peter Hook's playing). Mercvrial are an enigma in a lot of ways but what I do know with a high degree of certainty is that this is an outstanding album full of style, substance and just the right amount of swagger. Oh, and did I mention that this is their debut? Well it is and it's immense.