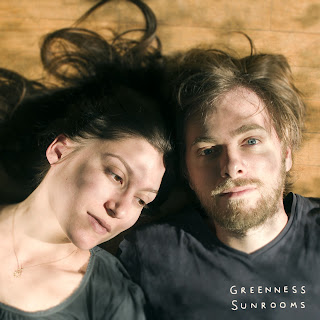 I was already intrigued by Brighton based duo Greenness based on their recent single release but this album has got me full-on infatuated. 'Sunrooms' is the debut long-player from the Anglo-French pair but don't let that fool you in to thinking this is anything less than an inventive, unique and enthralling collection of songs to sink your teeth in to. Things get underway with the woozy and other-worldly 'Solace' which drifts in on a soft summer afternoon breeze full of stillness and calm as Cecile Frangi's voice calls you, siren like, in to the sun dappled glade in the middle of an enchanted wood. Not bad for an opening gambit. By contrast, 'Sphinx' is a more up tempo and slinky number with electronic glitches of melody mixing with hip swaying rhythms and a French lyrics delivered with aplomb.

'Unfold' combines that folky, ethereal vibe of the first track with something more modern and sultry before 'Weatherman' adopts a more direct approach with a choppy acoustic riff and vocals that are full of soul and New Orleans swagger. There is a brilliantly English quality to 'Tea and Thunder' along the lines of Zoe Johnston in the delicate vocals and sparse instrumentation while 'Corridors' throbs and undulates around a simple guitar riff that puts me in mind of the Velvet Underground having a jam in the back garden of an Oxfordshire after a particularly heavy night.

'Destroy Enjoy' is the whimsical and shimmering single that first alerted me to the beauty of Greenness with its Sugarcubes energy and gloriously free spirit. The rainy afternoon with a broken heart of 'Building Memories' is sumptuous and 'Strange Spring' keeps that mood as the rich guitar sound winds around the vocals with fondness and regret. Penultimate track 'Home' kicks the energy up a few notches with a tune made for dancing to barefoot in a field in summertime before the mildly chaotic and almost experimental 'Firmament' brings things to a close in a way that Cosmo Sheldrake would thoroughly approve of. An album full of whimsy, delight, darkness and broken hearts which is far more than we deserve to expect these days so get involved and make this the soundtrack to your adventures this summer.