Fickle Friends - Are We Gonna Be Alright? 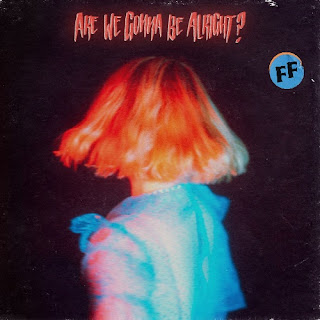 Fickle Friends dropped my favourite single of 2021 so I was excited to hear what they could do with the freedom of an entire album to play with and I was not disappointed. Not one bit. 'Are We Gonna Be Alright?' kicks off with the aforementioned single, 'Love You Death', which is as punchy and attention grabbing an album opener as you could ask for. It's an absolute banger whichever way you look at it. 'Not Okay' is a more heartbroken affair which sits somewhere between Dua Lipa and Nina Nesbitt but with a fractured and off-kilter energy that keeps the vibe moving nicely. The alt-pop sounds continue with 'Write Me A Song', a track which floats like a butterfly, stings like a bee and kisses like porn star.

The gourgesly spacey former single 'Alone' wafts in next as the breathy vocals work perfectly alongside the bouncy beat and sprinkled melodies like something between Dubstar and Lana Del Rey. Then, out of nowhere, 'Glow' brings the funk and the kind of dancefloor sound that will have you strutting round Lidl on a Tuesday night picking up some Halloumi and a reduced succulent for the bathroom. On 'Pretty Great' the band strap on a pair Raybans and go for a cruise through the 80s in search of Katy Perry's next big hit but, plot twist, they keep it for themselves and return to the future to conquer all in their way with perky pop perfection.

The great thing about Fickle Friends is that you get to fall in love with a band as well as great pop songs so it's two for the price of one. For example, 'Load On Your Mind' has a laid back indie vibe with a loose beat and soft, breathy vocals but there is still a cracking melody at the centre of the song which is what really matters, isn't it? 'Yeah Yeah Yeah' has a raunchier, rockier vibe that does the loud and quiet thing to perfection but also sets itself to be an absolutely incendiary live number. The bubbling melody of 'IRL' has incredible mass appeal and should be bouncing around mainstream radio this summer if there's any justice while 'Listen' sweeps, soars and spins with all the unbridled energy of someone dancing in kebab shop at 2.00am because their song just came on the radio.

'Won't Hurt Myself' is a genuinely beautiful song that builds from something subtle and soft in to the kind of chorus that will have devoted fans singing back at live shows - "I won't hurt myself the way you want me to" is an anthemic line for a song about self love and self worth if ever I heard one. The album closes with title track 'Are We Gonna Be Alright?', a sad banger of a late night bus ride home after a night of arguing. I feel like if one of the bigger pop hitters of had just put this album out just now there would be a huge fuss going on but maybe there is a benefit to more of a slow burn. So, now is your chance to get in while the fire is starting to spark before this album becomes one of the most talked about in 2022. It really is that good.