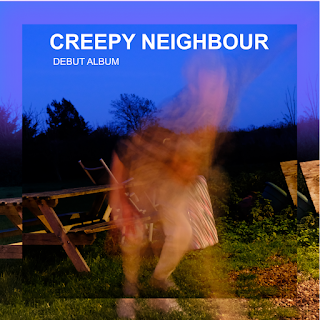 In all likelihood this will be my last album review of 2021 and I couldn't think of a better way to sign off what has been a challenging year than with the debut offering from soloist Creepy Neighbour. Taking the Tesco No Frills approach to album titles, 'Debut Album' very much does what it says on the tin but once you open that tin, oh what a treat awaits you. Opening with 'Draw A Map' and some backwards, Twin Peaks inspired vocals, Creepy Neighbour soon settles in to a brilliant pop groove fuelled by a pulsing bass line and organ stabs. 'Break A Leg' takes us on a romp through Vampire Weekend meets Beach Boys country in a soft-top while 'Love's Young Dream' continues the spaced out and slightly, well, dreamlike vibe as it wheels through the twilight.

Creepy Neighbour shifts to the piano for 'Summer Job' and the mood changes too into something more reflective that exists between Ben Folds and a young Elton John. The dirty pop guitar riff of 'Beyonce' soon emerges in to the kind of triumphant and uplifting music that you might expect from the Feeling or Mika in their pomp. The vocals on this album are stunning in their fragility mixed with bravery and spirit and this is never more evident than on the delicate one minute interlude of 'For Real'. Recent single 'Somebody Elses' Dream' still sounds as fresh as the first time I heard it as the bass thrum and those vocals bookend a glorious prog-pop meander.

'Self Help Signs' embraces that West Coast sunshine sound as it undulates and bursts with energy from every corner. Presumably an ode to gin, 'Mother's Ruin' drifts and staggers along with a slightly unfinished energy but it still gets to where it needs to be. The album finishes on 'The Optimist' which has one of those melodies that you feel like you've always known and will surely fit in to a movie at the perefect moment at some stage. This is a real song writers album that has been carefully crafted and honed with love and real attentiveness which you can hear in every note. An album to immerse yourself in.