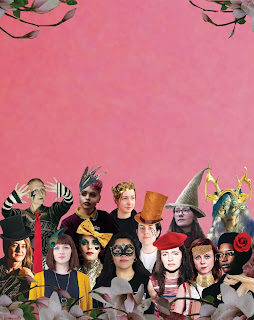 For those of you that haven't been paying attention, Hen Hoose is a collective of some of the finest female musicians that Scotland has to offer and 'Equaliser' is their first album release. All caught up? Good, then let's get down to business. The album opens with recent single 'Monochrome', a collaboration between Emma Pollock and Pippa Murphy which has a lovely indie bounce to it which puts me in mind of the Long Blondes, the Raincoats and Lush. 'Just Be Real' sees Murphy team up with Rachael Swinton for a more subdued and sultry track that is as honest as it is sumptuous.

The charge of this collective has been spearheaded by Tamara Schlesinger who you may know better as Malka and 'These Are The Nights' sees her team up with Karine Polwart for a typically tropical but dark alt-pop romp. The 80s bass squelch of 'The Best Is Yet To Come' brings Amandah Wilkinson and Carla J. Easton in to work with Schlesinger on a track that would perfectly in a John Hughes film about female empowerment in the face of capitalist misogyny - think Working Girl but with more neon.

The tone shifts down on 'Revolution Retribution' as Wilkinson pairs up with Jay Puren for a darker melody and a rapped lyric that draws you in to their world instantly. Elisabeth Elektra and Susan Bear tag team on 'Hush Hush', an icy cool melody with moody bass notes and a Sia meets Goldfrapp-esque vibe while 'Go Easy' brings Polwart back in alongside Bear for a delicate and folky ode to self-care and kindness - it is absolutely beautiful. Another single was 'The Bliss' which sees Schlesinger team up with Inge Thomson on an impish and ethereal track that is as atmospheric as it is enthralling with its collections of rhythms, sounds and fragmented melodies.

The dramatic and beautiful ballad that is 'A Change In The Light' by Sarah Hayes and Pippa Murphy is the kind of heartbreaking song that Adele would kill for while 'Make It Alright' is a piano based sad banger courtesy of Hayes and Elektra that makes the most of some 80s synth vibes. The penultimate song is 'Outrun You' by Wilkinson and Thomson with a real sense of outsider pop full of quirk and charm. Fittingly, 'Burn It All' is the final track, written and performed by Thomson and the very recently and sadly departed Beldina Odenyo - a soft and gentle piano melody that grows and transforms in to a quietly epic piece of music. This was an album intended to showcase the present of Scottish female talent and give power and hope to the future of those that will follow on. Tragically, this album is now also a testament to the past and the lost talent of Beldina Odenyo but there is still hope - there is always hope.

The Assist - Irrational Movements  Release Date: 12th November 2021 To say the Assist might the biggest and best to come out of Walsall somewhat undersells just what an exciting band they are. Their new single 'Irrational Movements' is the kind of anthemic indie that could only come out of the UK and, without sounding trite, from the poorer side of the tracks. The energy behind this track is the same as that early Happy Mondays or Stone Roses stuff but with the slicker production that comes from making music in the year 2021. "We're all so desperate for approval I'm scared" they sing with punchy vocal delivery, the track breaks down as though they've tripped over their own feet but the swagger picks up where they left off and there's an ear bleedingly good guitar solo to seal the deal. Did anyone order an athem? Anyone?  More information: https:// www.facebook.com/TheAssistBand

LONG FOR THE COAST - ALBUM REVIEW

Long For The Coast - Revolution Starts At  Home Release Date: Out Now Sometimes life gets a little too hectic to cope with and recently I've been in a bit of a whirl which is why I'm a little late sharing this one with you. However, ironically, this is the perfect album to help you unwind and touch base with yourself again. Totnes based duo Long For the Coast have brought 'Revolution Starts At Home' in to the world and, really, we should all be very grateful.  Opening with 'Splinter', the rippling acoustic notes, softly delivered vocals and shimmering percussion will have your shoulders relaxing and your breathing slowing down almost immediately. 'In Our Own Time' continues on the same path energy wise with a little nod to county-mates Harbottle & Jonas in the folky leanings and male/female vocal harmonies. The third track of the opening trio is perhaps my favourite on this collection as 'Hold On, Brother' is the kind of song that will make y

Emeline - Chinese Whispers  Release Date: Out Now Westcountry dark rockers Emeline are back with new new single 'Chinese Whispers' and it doesn't pull any punches. Some of the heaviest drums I've heard in a very long time (I'm talking Viking ship heavy) are tangled up in the barbed wire guitars with the vocals searing through to cut you down to size. There's a beautifully dead-eyed delivery of lines like "The root of all your anger is you, the root of all your problems is you" that make you feel both put in your place but also wierdly inspired.  More information:  https://www.facebook.com/emelineband Watch the Video: