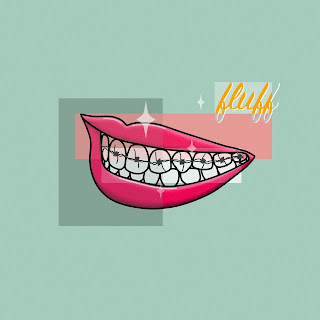 Release Date: Out Now
Fluff is the moniker of a one man punk rock project from Exeter and 'Barbed Wire Braces' is his aces new EP that you should give over some time to. The six track collection opens with 'Mad Ting Sad Ting' which enters in a flurry of guitars and the kind of beat that stutters in to life before the whole thing errupts in to the kind of furious tune that will have parents banging on bedroom doors asking kids to turn it down. 'Grinner' continues the energy with a Jamie T meets Liam Lynch via a drum machine vibe while 'Property Value' mixes in a little influence from the Clash but with the swagger of Arctic Monkeys and Andrew W.K. for good measure.
Title track 'Barbed Wire Braces' continues the oddball processed punk theme with a beat that sounds like Animal losing his shit with a roll of bubble wrap and an angrily shouted nursery rhyme of a chorus, "yes sir, yes sir, three bags full sir". '21Thunder' is the prog track on the EP at just under five minutes in length but that doesn't stop it hitting as hard as Sleaford Mods with slick guitar work running all the way through like a stick of Brighton rock. Final track 'Ninety9' is the end of the night in music form as the lights come on with the feedback still ringing in your ears and a sudden realisation that you've been dancing with a recycling bin all night. Chaotic, infectious and a whole lot of fun but not without its substance either. Bravo, Fluff, bravo.
More information: https://www.facebook.com/flufftheband

Elkyn - Found The Back Of The TV Remote  (Tambourine Machine Records) Release Date: Out Now You know that thing where you meet the friend of a friend and wind up getting up closer to the friend of the friend than you were to the original friend? Yeah, well that's how I feel about Leeds' Elkyn...for some reason. 'Found The Back of the TV Remote' is the latest release from the nu-folk troubadour and it has an uplifting sadness to it like Noah Gundersen or Johnny Cash dueting with Bruce Springsteen. The chugging bass and punchy drums give Elkyn's understated vocal just enough space to breathe, creating some Bon Iver-esque atmosphere going in to the swell of the chorus. This is the kind of song you want to hang out with and maybe go to the record fair with.  More information:  https://www.facebook.com/Elkynband  Live Dates:  Friday 15th October – Fulford Arms, York Friday 22nd October – Bobiks, Newcastle Friday 12th November – Folklore Rooms, Brighton Sunday 14th Novemb