Due to COVID, cancer and just generally being a little bit anxious about heading in to places where lots of people are gathered, this postponed one day festival near Bodmin represented my first tast of live music since January 2020. That's 21 months without hearing the roar of a distorted guitar, the thump of a rhythm section hitting my ribcage or the impassioned call of a singer trying to reach you through their words. It was the longest I'd been without music since my first venture to a gig so I was a bundle of nerves, excitement and apprehension when we arrived on site in the middle of nowhere but that all melted away (well, apart from the excitement) as soon as I opened the car door and heard (and felt) the rock'n'roll rumbel of Sam Richardson & the Renegades pumping out from the main stage. Channeling the spirit of Springsteen through a blues-rock set that deserved a bigger and more attentive audience, the quartet whipped through a set delivered with consumate professionalism and more than a little swagger.
My companions and I had splurged on VIP tickets which got us access to a covered area, some very 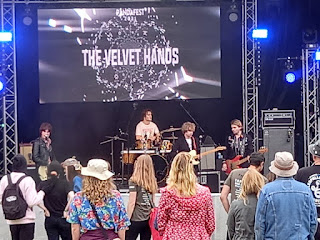 welcome deck chairs and a queue-free bar which worked very well until the 'cashless' festival's card readers all simultaneously packed up for ten minutes. At the back of the bar, however, was a second stage which featured duo Nierra Creek who's mellow indie-electro fitted the time of day but couldn't quite compete with the excited chatter of the bar as folks settled in for a day of revelling. A quick trip to the Fat Cat food van for some banging stir fry pork noodles and then we were back to the main stage to check out Cornish garage rockers the Velvet Hands, a band I have grown to love over the years but never seen live. The lads didn't disappoint with the kind of performance that sets them apart from your run of the mill indie-rock band as they performed with true rock swagger and the kind of attitude that would work in a grotty pub or a stadium - these guys only have one setting.
Having recently performed to the leaders of the free world at the G7 summit dinner, local singer-songwriter Daisy Clark is more than capable of handling a roudy Cornish bar as she proved by singing her siren songs to tame any number of savage beasts. The sound was still a little on the quiet side but with a voice so pure and strong you couldn't help but admire the strength and beauty on display. One of the main pulls of PandaFest for me was the chance to finally see talented artist Bailey Tomkinson and her band for the first time. The set was an absolute triumph as the country tinged indie-rock soared out over the ever-increasing crowd and the sun even made an appearance by way of celestial approval. When the songs, the voice and the musicianship all match up then you know you're on to something special and that is exactly what we witnessed here today, somewhere, in a field near Bodmin. 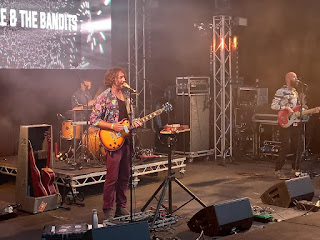 The Rezner amassed a lively crowd back in the bar area as the Jungle stage's low roof and riotous atmosphere was perfect for their punk fuelled garage rock but, again, the sound was a bit of a let down until near the end of their set. By contrast, the sound for the main stage was as good as any I've heard inside or outside in many a year so a big shout out to the sound booth who even coped with a barrage of abuse from children armed with hay bales. The combination of this excellent sound and the sheer force of nature that is Wille & the Bandits made for a compelling watch and listen. Even without their keyboard player who had succumbed to 'rona, the remaining trio put on an awesome desplay of funk fuelled rock'n'roll with grooves deeper than the grand canyon and a  rhythm section punching harder than a heavyweight. Throw in a voice that would rival Eddie Vedder in a sing-off and a crowd of all ages seriously getting in the vibe and you've got the perfect recipe for a good time.
By this point, the sun was fading, the crowd was in good spirits and a man in an inflatable panda suit was being harrassed by a swarm of children fuelled by fizzy drinks and waffles. The perfect time, then, to introduce the arch party experts Mad Dog Macrae into proceedings like a lit match in a powder keg. If you've not had the pleasure then you really should seek these guys out as their uniqe and fiery brand of gypsy-punk-folk will have you reeling and jigging with the best of them as their guitars, penny whistle, violin and mandolin weave a merry dance around a rhythm section that could power a small country.
It felt like even a surprisingly reformed (and alive) Beatles performance couldn't top that, let alone Toploader, so we made for the exit with smiles on our faces and a ringing in our ears. Having started the day in two minds about whether to attend, I couldn't be happier with how PandaFest turned out. A well organised, friendly and welcoming event with just enough for everyone in terms of music, food, drink and general good times. Let's hope the conditions converge for a repeat next year and I will definitely be back. Bravo, PandaFest, bravo.
More information: https://www.facebook.com/PandaFestOfficial