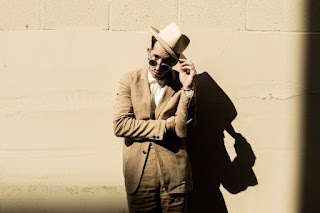 Well, well, well. I've not encountered Pokey LaFarge before but I am already a little bit in love with him - his music, his style and his seriously perfect teeth. 'Fine To Me' is a joyous experience both visually and orally as LaFarge and his amassed gaggle set about swinging their way in to your hearts. Rhythm and blues in the original style with a walking double bass and scratchy guitar is the order of the day with a simple and tinkling ivories to complete the melody. LaFarge's voice sings out clear as a bell with an old-timey quality that makes this both classic and fresh, a combination that makes you feel like you know this song but it still zips and zings like the first day of summer. Beautiful energy.