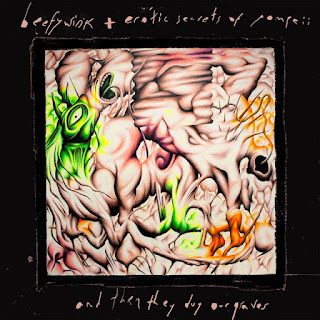 Then They Dug Our Graves

Bit of a Bristol heavyweight collaboration for you now as LWM favourites Erotic Secrets of Pompeii have teamed up with neighbours Beefywink to release new single 'And Then They Dug Our Graves'. A yawning guitar is soon blasted in to oblivion by the gothic-punk clatter as the pressure cooker is turned up to 11. There's an 80s vibes to this and the interplay in vocals between both bands is frantic but you can't take your ears off it for a second like a fight in a pub between a couple that ends in a chaotic but amorous climax. The fire in the belly of this track, however, is the inaction of 'the powers that be' to enable women to feel safe on the streets at night and, sadly, that is a fire that will burn for a long time I suspect. A great song but one that I'm sad needs to be sung.