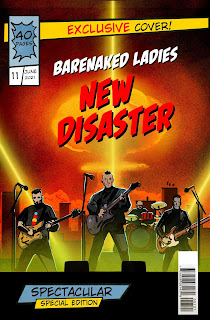 Canadian indie-rockers Barenaked Ladies are back with a superbly animated video and a song that calls out a lot what is wrong with the world. 'New Disaster' takes on 24 rolling news, fake news and the selling of disaster all set to a sing along track that worms in to your ears faster than you can say 'capitalism is killing us'. The booming drums add a sense of impending doom to the perky guitars and the Coldplay-esque ooh-ooh-oohs have a stadium sized feel to them. I'm not sure this song will change the world and the band's echo chamber will remain largely unaffected but at least it's an internationally recognised name taking aim at media groups and the politicians that benefit from them so brazenly.