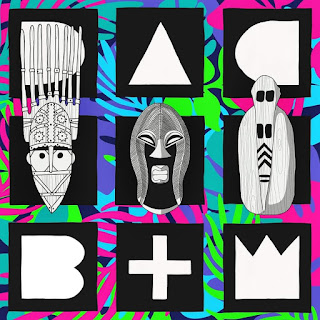 The excellent Exeter collective Dakar Audio Club are back with their uplifting new album 'B+W' which I'm assuming stands for Black + White but could just as easily stand for Bored + Waiting or Brenda + William for all I know. The album starts with the chilled strains of 'Howmoco' which fuses pinging guitars, smooth sax and understated vocals to begin the transportation process of taking you to somewhere new and exotic. 'Xalis Amuul' is up next with some fresh percussion popping and exploding at various intervals in between the guitars while 'Nea Wurri Solo' has a real travelling vibe, the kind of song you want to listen to as you look out of the window of a fast moving vehicle watching new landscapes fly past your eyes.

The mood shifts quite dramatically on 'Sossul Ma' as it feels like you've walked in to an 80s nightclub with a funky beat pumping out that you can't help but walk in time to as you approach the bar for your first drink of the evening. 'Dancing in the Moonlight' has nothing to do with that 90s indie cover but is instead a joy of rippling guitar notes, furious percussion and low slung group vocals. On 'Buganala' the band bring their unique blend of Afrofusion to the fore with a blues groove played out on West African guitar chords to brilliant effect. There is something extremely comforting about 'Amuul Solo' from the soft vocal tones to the welcoming chord progressions while 'Lines in the Desert' has feeling of a lively lullaby and you can imagine rocking yourself to sleep in a hammock with a broad smile on your face while this plays off in the distance at Glastonbury.

'B+W' finishes off with 'Aduna', a song which meanders over its six minute existence from trippy jam to full on wig-out and everything in between - definitely a song to be experienced live, me thinks. Dakar Audio Club are now well established as pioneers of the Afrofusion genre but its all the different flavours, influences and tones that they bring together that makes this album such a delight. After just one listen you'll feel like you've walked through a vibrant market, tasting samples from all the different stalls to create a real melodiousness in your mouth. A real treat for the senses.