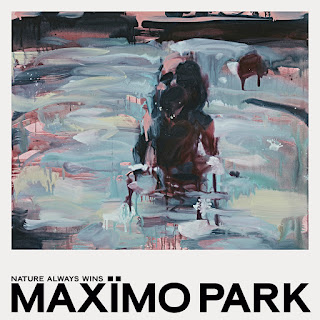 I am very, VERY excited to be reviewing the new album by Maximo Park who are, in my book, one of the most criminally underrated bands of the 21st century. Any trepidation I had about the quality of this is blasted away within seconds as the opening track of ‘Nature Always Wins’ kicks off with intense energy and infectious melody. ‘Partly of my Making’ has a stomp and strut about it that suggests a band operating with confidence, creative juices in full flow and, possibly, new shoes. ‘Versions of You’ drops the energy down initially to create a typically Maximo Park story of micro-moments of life set to a jagged beat and gorgeous swathes of guitar with a bass line bumbling underneath.

There’s a lo-fi energy to ‘Baby Sleep’ with a punchy, twitchy beat and synths that sound like they were frozen in the 80s giving Paul Smith’s trademark vocals and the searing vocals a chance to do battle. That same garage-punk energy continues in to ‘Placeholder’ with jangly, Cure-esque guitars while ‘All of Me’ is an out and out indie-pop banger that should be played as we all return to indie discos at some point in 2021, such is its triumphant nature. I think my favourite track on the album is ‘Ardour’, largely because of the low-slung guitars and the kind of tempo that makes you want to race through a city a night until the street lights become neon streaks (seriously though, drive safe).

This is an album that knows where it is going and it knows what it wants when it gets there so you don’t have time to think about jumping on board, you need to act instinctively. ‘Meeting Up’ continues the competitive pace with a pulsating and sexually futuristic melody before ‘Why Must A Building Burn’ slides in to view full of charm, pinging piano notes and some frantic guitar playing which defies both physics and biology. There’s slightly psychotic, Young Knives-esque vibe to ‘I Don’t Know What I’m Doing’ which you can’t help but love and ‘The Acid Remark’ takes those strained guitars on a crooning indie odyssey.

As we reach the final bend, ‘Feelings I’m Supposed to Feel’ lowers the pace a little as we get to peak under the psychological hood of the band but still with that trademark style and charm. Final track, ‘Child of the Flatlands’ eases us into our destination like a train pulling into a station at the end of journey where you’ve met the love of your life over a discarded copy of onboard magazine and some searingly hot tea in a polystyrene cup. In a world where everything has changed around us in the last 12 months, it is incredibly reassuring to hear this album showing off that Maximo Park are as great as ever, if not even better. Cripes.