The New America – Going to the Races (Dressed 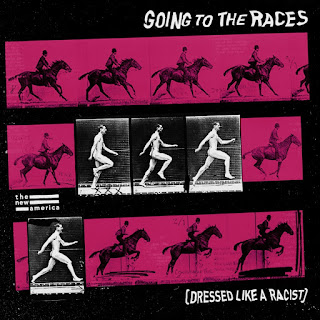 I don’t want to accuse Bristol noiseniks The New America of being opportunists but releasing a song called ‘Going to the Races (Dressed like a Racist)’ during the most contentious American election in modern history is, to say the least, shrewd. A throbbing bassline introduces proceedings before the hurtling, 100mph drums and guitars join in and the spirit of Mark E Smith shouting in from the next room. This is direct, abrupt, unapologetic and raw which is exactly the short, sharp jolt the world needs these days.

Elkyn - Found The Back Of The TV Remote  (Tambourine Machine Records) Release Date: Out Now You know that thing where you meet the friend of a friend and wind up getting up closer to the friend of the friend than you were to the original friend? Yeah, well that's how I feel about Leeds' Elkyn...for some reason. 'Found The Back of the TV Remote' is the latest release from the nu-folk troubadour and it has an uplifting sadness to it like Noah Gundersen or Johnny Cash dueting with Bruce Springsteen. The chugging bass and punchy drums give Elkyn's understated vocal just enough space to breathe, creating some Bon Iver-esque atmosphere going in to the swell of the chorus. This is the kind of song you want to hang out with and maybe go to the record fair with.  More information:  https://www.facebook.com/Elkynband  Live Dates:  Friday 15th October – Fulford Arms, York Friday 22nd October – Bobiks, Newcastle Friday 12th November – Folklore Rooms, Brighton Sunday 14th Novemb