The Allergies – Say the Word (Jalapeno)

The Allergies are the kind of guys I would have gone nuts over back in the 90s and, well, not much has changed in that sense – I’m a sucker for a bit of funk and great sample. The duo’s new album, ‘Say The Word’, has dropped for the weirdest summer in most of our life times and is the perfect soundtrack for those staycation, stay at home, festival in the garden and camping parties so let’s top up the cuba libre and dive in shall we?

The album kicks off with ‘Hit Me One Time’ featuring Andy Cooper which has a real James Brown vibe but if James Brown had been making his mark around the birth of Hip-Hop. Already my Deejay Punk Rock and Jacknife Lee penchant is tingling and we’re only one horn laden funky track deep. Recent single and Cuban Brothers collaboration ‘Let Them Know’ is the sound of summer carnivals and the perfect tune to mix sangria or tequila sunrises to before album title track ‘Say The Word’ gets all Shaft meets Motown funk on our asses with Cooper returning on vocals along with the soulful Marietta Smith. It’s a real shake down.

‘Felony’ keeps the high tempo groove going and uses some deep horn samples to smooth out the honky-tonk piano giving this a Parov Stelar feel before Smith takes the lead on ‘Take My Love’ which brings to the Motown greats full of class, sass and dusky soul in the vocal department. We are finally given a little respite on ‘I Just Got That Feeling’ which has us in sunset mood with the sea washing on a gravelly beach while cocktails are sipped and people dance slowly in linen and tiki torches get lit. The funk motor gets running again on ‘Every Trick in the Book’ with a Fat Boy Slim meets Morcheeba groove and then ‘Get Yourself Some’ gives you the lift you need to get up, strap on a facemask and take on the world with a little groove’n’slide in your step. It’s like liquid motivation….in your ears. 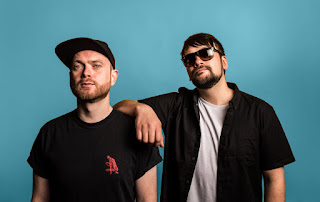 There are 13 tracks on this album but essentially, it’s one big party with different vocalists taking the mic as the mood takes them and it is glorious. Cooper and Smith come back together for ‘Rile ‘Em Up’ which is a call to the dance floor before Dynamite MC takes over on ‘Hot Sensation’ which brings things back in to the Hip-Hop arena with breathless flow and scratching that leaves you hypnotized. In the home straight we get treated to guest appearances from Dr Syntax and Skunkadelic on ‘I’m On It’ which also features furious bongos and the kind of bass line that makes you want to walk/type/drive/cook faster depending on what you’re doing when listening (this is not a song for making sweet sweet love to, just a tip for you there for free).

‘Take Me Back’ brings in Mr Woodnote for some saxy tones on a jazz inspired tune before we get to the curtain closer for the best evening of your life. ‘It Feels So Good’ brings back Smith for one more song and we get in to a real Groove Armada rhythm which lifts the spirits, moves the hips and will have you dancing all the way home with your shoes in your hands and a cocktail umbrella tucked behind your ear. ‘Say the Word’ is miles out in front in terms of album of the summer and if this isn’t in the running for the album of the year then the second half of 2020 is going to be a real treat. Get this in your life, you deserve it.