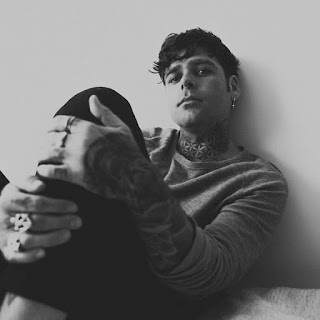 This is the debut solo album by the Westcountry creative force that is Daniel Steer and it is, well, it is something to behold. The self-titled offering opens with ‘Monster’, a song that rises into existence from beyond the grave through a wall of distortion before settling into an infectious riff that is somewhere between Queens of the Stone Age and the Fratellis. And we’re off, Steer is like Depp’s version of Willy Wonka but dressed in black and driving a train full of damaged souls. By contrast, ‘Pond Skating’ is a more indie-rock number with a vocal style that’s like Robbie Williams in his early solo days when he was hanging around with Oasis.

The slathered organs and steady rhythm of ‘The Wire’ lead you into a false sense of security before the chorus erupts into chest beating triumphalism full of euphoria. ‘Green’ bursts to life with taught guitars and a more indie-pop vibe with drive that you would expect of the Killers or Feeder in their pomp which is impressive for a solo artist on their debut long player. The Maccabees spring to mind on ‘Hero’ when the thumping kick drum joins in with the brooding guitars and moody vocals while ‘Sweet Dreams’ is a joyous slice of anthemic indie-pop that goes back to Brandon Flowers & company for it’s inspiration in terms of the smoothly delivered vocals and infectious energy.

The sprinkled piano and sparse percussion of ‘Sleep’ is sombre and a complete change of pace as Steer manages to fold the feeling of insomnia into a melody which is as uncomfortable as it is impressive. I’m not mad about the yoof spelling in ‘Modern Luv’ (you’re better than that, Daniel) but the angular guitars and uplifting melody more than make up for it so I’ll let it pass. Entering the home straight we are introduced to ‘Take On The World’, a song that wants to lift you up despite lyrics like “It’s a long way down to the bottom of an empty grave” – take note, Gary Barlow, you choad.

The debut album from Daniel Steer is ten tracks long – the perfect length for an album – and it closes out on the impossibly beautiful ‘Pictures’. Gentle acoustic guitar, subtle piano notes and Steer’s softly confessional vocal make for something really refreshing, almost pallet cleansing after the numerous flavours and textures of the previous nine tracks. You’ll be hard pushed to find a better debut album this year and if there are any better indie-rock albums out there then send them my way but in the meantime you should definitely check this out.