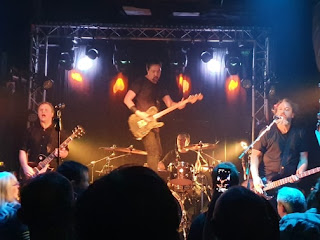 My journey with Shihad dates back to the late 90s when a school mate leant me a copy of their ‘Killjoy’ album and I was instantly besotted by the chunky riffs, deep grooves and slanted take on song-writing. The Kiwi band instantly found a place in my heart and I followed their career from afar ever since, enjoying the music but always assuming I would never get to see them do their stadium filling thang in real life. And then came this tour, five dates in the UK all coming to a climax on a converted boat docked in Bristol, the night after the New Zealand quartet packed out the Shepherd’s Bush Empire. The only snag was that there were only about 50 people in a venue that can hold 400 – that usually bodes poorly for a memorable night. Oh, how wrong I was…

Shihad took the approach of playing two or three of their favourite tracks off each of their albums, starting with their most recent long player, ‘FVEY’, and working backwards. This meant a brutally heavy onslaught of a riff opening the night up with title track ‘FVEY’ and ‘You Think You’re So Free’ – this was not a soundcheck, people. Most of the people in the Thekla were die hard fans, grinning from ear to ear as crunching riffs were met with familiar melodies and a thunderous rhythm section but even the newbies were swept away by the power of the band, it was impossible and futile to resist. What was most impressive, however, was these four guys looked like they were playing the biggest gig of their career and loving every distortion soaked second of it. This was like a private show on the set of a Nirvana video that never saw the light of day.

Frontman Jon Toogood was a consummate professional in his performances during each song but many an artist could take a leaf from his book in the way he connected with the audience – whipping the pit in to a frenzy at one moment and then sharing a joke the next - even apologising for the band’s brief dalliance with changing their name to Pacifier because the morons of the world couldn’t tell the difference between Shihad and Jihad. There was a palpable peak to the set when Toogood took to the mic with nothing but a woozy synth backing for a rendition of ‘Brightest Star’ from the ‘General Electric’ album which then bled in to the frenetic ‘My Mind’s Sedate’, just as it does on the album. 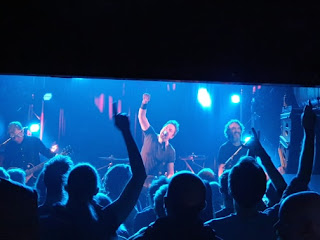 The moment at least half the crowd were waiting for came in the form of the band’s anthem, ‘Pacifier’, and hearing a room full of devoted fans scream back the lyrics of “Don’t look so worried you know, there ain’t no hurry, cause life’s supposed to ebb and flow, now you’re all clear to go” brought a huge smile to each band member’s face. The band’s self-titled album gets represented by the excellent ‘Home Again’ and the break-neck ‘La La Land’ which have not only stood the test of time but also sound incredibly fresh for a band who, by their own admission, are about to hit their fifties and don’t have the bodies to justify ripping off their t-shirts when over exuberant riffing gets the better of the stitching.

The arc of Shihad’s sound is like a bell-curve from heavy riffs to more melodic rock and back again which is not only unusual but also makes for a killer set. The heavy guitar that introduce ‘You Again’ from the ‘Killjoy’ album drags me back to my first encounter with the band’s music and ‘Deb’s Night Out’ was an unexpected but hugely welcome inclusion. For an encore we were treated to ‘Factory’, the first song on first album ‘Churn’, and ‘Cheap As Fuck’ from the most recent release – closing the circle on a pin-point perfect set. The sound was the best I have heard in a very long time, the set was perfectly selected and the performance was just as tight as you might expect from a band that can hold stadium crowds in the palm of their collective hands. It was a 9.5/10 night that could only be improved by the rest of the venue having been full of punters but that’s on them. Losers.