Gozer Goodspeed – Running with the Outliers

The evolution of Gozer Goodspeed has been a privilege to witness and this debut album feels like a real coming of age, musically speaking of course. ‘Running with the Outliers’ is a short album at only seven tracks, but Goodspeed’s intention is to hit hard with each song and leave you wanting more, it’s a classic tactic but one that is overlooked all too often. Opening with the album title track and recent single, ‘Running with the Outliers’, we are instantly transported i to Goodspeed’s world of deep grooves, hooky melodies and the kind of songwriting that really belongs on a 7th or 8th album, not a debut. The brass neck of the man. ‘Gambler’s Last Day’ weaves in some mid-west style as the drums and bass of the newly assembled Neon Gamblers backing band add some heft to the deft guitar work. Whispered, pleading vocals of “Ghosts of the future and past, make me a better man built to last” are sent up along with the sparks from the campfire, hoping to see one more sunrise over that horizon.

One of Goodspeed’s great qualities is his unpredictability so it is reassuring to raise my eyebrows at a title like ‘Pumas and Neon Signs’ which introduces a song of meandering, almost disorientated bliss with softly crashing cymbals and swimming guitars that, if you close your eyes and lean back, will carry you off downstream. ‘If Not Yourself, Who Do You Think Will Save You?’ is a wonderfully esoteric title for a tune that starts off as Grunge-Blues but soon develops in to something with more attitude as our troubadour delivers some home-truths alongside his trademark guitar work. Storytelling is another central tenet of Goodspeed’s work and ‘King Point Marina’ is a great example of that, channelling Bob Dylan and Shane McGowan atop some forlorn guitars and sombre strings to tell a tale of a Plymouth waterfront location. 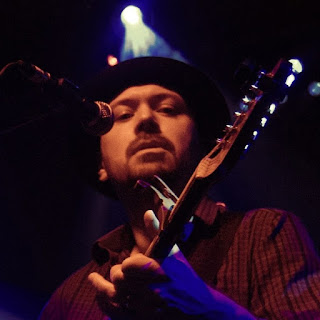 Kicking things up a notch as we enter the home straight, ‘February Almost Broke Me’ finds Goodspeed and his Neon Gamblers in loose form as the guitars strum with an ominous persistence and that vocal rasp cuts through the night air like a chainsaw through a block of ice, chipping off shards to drop in to neat bourbon. ‘This is the Pathway’ is the encore tune that starts like the drunken ramblings of a man who has nothing  left but the blues to keep him company but Goodspeed is better than that and as the rhythm section wearily join in this becomes almost evangelic in tone and length. This is the end of a long opening act for Gozer Goodspeed and as we are introduced to his new sidekicks and new characters in his songs you can only be enticed by the prospect for Act II and all that it has to bring. For now, however, a tip of the hat and a turn towards to the sunset with his guitar strapped to his back is all you’ll get from Gozer Goodspeed – he’s not one for hanging around in one place too long.