Sometimes you find yourself in a bit of a funk and you think to yourself “I can stay deep within this funk or I can do something positive to move out of it”. I did the latter about 6 months ago, and decided to put together a day of music to raise money for a charity that had helped with my treatment after having a cancerous tumour removed from my groin – hence the aforementioned funk. The day of music was called One Day Fest, it happened on 25th March and it was glorious.

As the early afternoon sunshine beamed in through the windows of the perfectly located beachside pub, the Inn on the Shore, 15 musicians of various ages took to the stage under the title of the Deviock Community Music Group and suddenly we have an ensemble playing up some Jazz classics and easing us in to a day of live music in the sunshine. Flute, violin and brass all mix with a tight rhythm section and an impossibly cool guitar (like, clear Perspex) to make for an impressive group piece that sets the tone perfectly.

Once a gaggle of music stands and instruments had been cleared off the stage there was just one man left. One man in a hat. One man in a hat with guitar. That man was Gozer Goodspeed and he brought his stomping rhythms and twanging guitar to play along with his rasping Blues vocals which kicked things up a notch. Fans young and old are captivated by Goodspeed’s raw energy and infectious melodies so you can bet on him for a sure-fire bet to get a party started whenever you need it.


Now, for those that haven’t experienced the soulful, dusky tones of Joanna Cooke then you really haven’t been paying attention, have you? Her duo’s performance in front of a sun dappled English Channel could easily have been happening on the coast of Monte Carlo such is the classy and consummate nature of her music. A fully original set showed off her range, yet again, as we eased through soul, pop, R’n’B and the blues and discerning ears were drawn to her performance like moths to a flame. Cooke has been handpicked for a support slot with the ‘so-hot-right-now’ Rag’n’Bone Man so things are starting to stir for her but today was all about the perfect sound in the perfect environment.

The openly hungover Jamie Yost was up next and I’ve rarely seen a man take a stage so reluctantly but between the moments of uncomfortable shuffling and dehydrated discomfort, something wonderful happened. Yost’s voice is full of soul, charm and a sense of mature ease that should set him up there with the housewife’s favourites like James Morrison but the content and structure of his songs as well as the playing of his guitar gives this more depth than your average Radio 2 fodder. If this is how Yost performs hungover then if we can catch while he’s still drunk or even sober then dangerous things might happen. Good dangerous. Sexy dangerous.

Saltash lad Paul Armer takes the stage with a more quietly confident manner and sets about quickly
rattling the windows from their frames with a fiercely strummed guitar and the occasional blast on a harmonica. Armer has a style that’s instantly engaging and likeable with the energy of Frank Turner in his early solo days. As the sun started its move over towards the Western part of the Cornish coastline you couldn’t have a better soundtrack to rouse you from an afternoon of drinking in the sunshine and prepare you for an evening of revelry.


To ease the gathered masses in to the twilight session of the evening we had the sounds of Devon boy (currently ensconced in Newcastle – yeah, he made the trip) Nick Gladdish bringing his radio friendly indie-acoustic tunes to an eager and swelling audience. Mixing slow, more delicate heart-string tuggers with whooping, stomping more anthemic numbers, Gladdish is a flawless performer who prowls the stage like a man born to it. He’ll be back from beyond the wall, it’s in his blood.

Now, it takes guts to get up and perform in front of a crowd but it takes real guts to do it for the first time in front of a crowd that largely consists of neighbours and friends. Well, one Mark Cornwall did just that as the sun gave up the fight and rattled out a string of covers with a twist that had the crowd singing along with glee and support. Let that be a message to everyone, if you feel the music within you then there’s never a bad time to start. 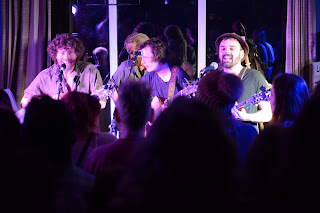 While the gathered revellers queued at the busy bar, the hopeful listened for the raffle number to be called and one lucky woman agreed to marry this humble reviewer, something was stirring on stage. In a mass of impressively wild hair, beards and a strangely relaxing smell, the near legendary Phat Bollard took to the stage and the anticipation was palpable….and justified. From the first strum of a tightly strung mandolin, you can tell that this is a group of musicians (brothers, almost) that spends every waking and sleeping hour together. Their brand of furious folk is infectious and before long the crowd were dancing, hanging from the walls and generally enjoying life just about as much as it is possible to enjoy life with your clothes on.

In terms of tough gigs, following a double encore is pretty tough but throw in the fact that the Busketeers were down a member and one of their number was performing with them for the first time then you’ve got a steep mountain to climb. That said, these two lads took to the stage with quiet determination and set about getting the crowd dancing. It is a universal truth that a packed pub that is dancing Irish inspired folk one minute will then be joyously singing along to Mark Morrison’s ‘Return of the Mack’ the next – albeit a funked up version played out on acoustic guitar and Cajon. The mood was lively, the smiles were broad and the dancing happened like nobody was watching which is surely the best kind of dancing.

To top the night off, those that started it returned to finish it – minus a few members – as the Deviock Community Music Group took to a night time stage but this time the style was soul and Motown to top the night off in the perfect style.

The day was perfect; we raised over £2,000 for St Luke’s Hospice, enjoyed some sublime music and the sun shone for the first time in what feels like a year. Music has healing powers, they say, and on this evidence, I think I’m starting to agree.