LISTEN WITH MONGER'S FESTIVE ROUND UP

It’s something of a tradition now that every December a slew of Christmas singles appear with a healthy smattering of original attempts as well as some reworkings, all hoping to get that John Lewis contract for next year or at least a stab at the top 40. Rather than cherry pick these I thought I’d just review them all in one go – kinda like demolishing a tin Quality Street in one sitting without any shame. So here goes:

First up we have Corvus with ‘Can You Hear The Sleigh Bells Ringing?’ and it’s a strong start if you like McFly-esque indie-pop lifting melodic elements directly from the Jam’s ‘Going Underground’. It’s an extremely polished piece of music with a definite festive edge (sleigh bells and a slightly creepy attempt at a children’s choir) but there’s something lacking that I like in a Christmas song and that’s the sense of slightly chaos that you expect from an office Christmas party. If you heard this in the background in a Beefeater at Christmas you wouldn’t bat an eyelid but I’m not convinced this is a future classic. 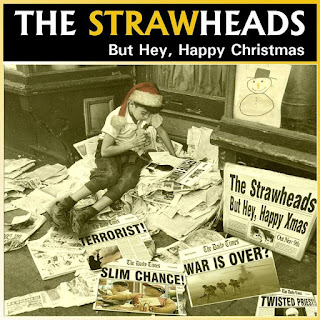 Peterborough’s The Strawheads are next with ‘But Hey, It’s Christmas’ and now we’ve moved in to slightly depressed socio-political commentary territory a la John Lennon and Gary Jules. There are sleigh bells again (naturally) and a slightly earnest acoustic chug in the style of Crowded House as they sing of war, drug abuse and famine (“the third world crop is failing”) and basically make you feel guilty for eating After Eights for breakfast. Not a bad song but we’ve already got Band Aid to make us feel guilty at Christmas so I’m not sure we need this.

For the only reworking of the night we must turn to Ciaran Lavery as the Irishman takes on the classic ‘Have Yourself A Merry Little Christmas’ with a delicate touch and a rich, haunting vocal. The plodding acoustic plucks are soon augmented by some gloriously rich strings and Lavery’s vocals do the lyrics more than a little justice. There’s a nice little animated video too which works with the live recording to give this song just enough energy to trudge home from the pub on Christmas Eve just as the clock hand passes 12 and the slow flakes start to swirl in the light of a flickering street lamp. 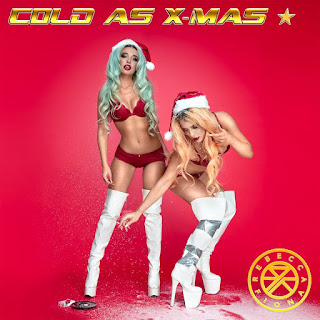 Changing pace and style completely, it’s time to give Swedish duo Rebecca & Fiona a listen with their blissed out stoner-pop effort, ‘Cold As X-Mas’. Much like compatriot Angie, Rebecca & Fiona like slowing things right down and wearing very little but that doesn’t stop them feeling festive. Their Scandinavian tones do give this a certain festive authenticity and they manage to squeeze “sitting all alone under the mistletoe” in as a lyric while processed church bells chime in the background which is pretty damn Christmassy. The only problem here is that this would be almost impossible for a choir to sing what with all the vocoder effects and backwards sampled vocals.

Now, The Senti-Mentals have plumped for a track called ‘You Show Me Yours At Christmas’ and it’s a little bit lively. There a sleigh bells and chimes, for sure, but then a ska-polka kicks in and the band are off on a mile a minute romp based around the age old chat up line of showing women your genitalia in the hope that they will return the favour. There’s a slightly disturbing video of a badly animated reveller getting repeatedly kicked in the nuts, vomiting all over himself and then getting shat on by a reindeer. Spirited, for sure, but is it festive spirit?

Loop Line's effort, by the name of 'Christmas in July (in December)', is a sweeping Beach Boys-esque piece of loveliness that takes in the likes of Best Coast and Tennis with it's perky guitars and summery vocals. The Minneapolis duo sing of Santa arriving on a boat pulled by dolphins and wearing shorts during the festive season which, while novel, is just plain wrong so although this tune is musically gorgeous, I can't approve on a lyrical basis.

There’s a deep, Eurovision style message from Nita Nielsen on her song ‘One World Together’ which actually has a sense of hope and joy about it that is hard to ignore. More sleigh bells, chimes and a choir lots of mentions of wishing upon stars, silent nights and general feelings of love and generosity. Strangely, Nita spends most of the video hanging around down at the docks in Copenhagen whilst clicking her fingers or singing with a choir of waiters from Prezzo but that doesn’t stop this being a perky, optimistic tune that it’s hard to hate – a bit like your bonkers aunt/uncle who always buys you a weird present but is a right laugh when they’ve had a few.

The simply named ‘Father Christmas’ is the effort from singer-songwriter Jon McDevitt and it has a pleasingly shuffling country-skiffle rhythm that embodies a British high street in the days running up to Christmas. McDevitt employs a Jona Lewie vocal style (i.e. miserable as sin) but there are sleigh bells, a perky fiddle and even a children’s choir singing “I’m Father Christmas, I’ll have a whisky, I’m Father Christmas, will you miss me?” giving the impression that this is some sort of suicide note left to cause some poor child years of therapy and possibly end Christmas for good. 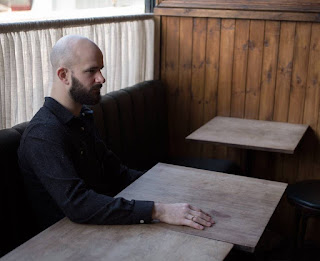 Charles Cave doesn’t sit on the fence when it comes to Christmas as his song ‘This Fucking Time Of Year’ tells you all you need to know about his views on the festive season. That said, the melody is pure 80s pop joy in the vein of Simple Minds or Deacon Blue with a simple keyboard stab and breathy, airy vocals. There’s a gorgeously wonky home video that accompanies this one and the distaste in the lyrics is easy to ignore if you focus on the icicle cool synths.

Finally, we have Homesick Mick with his festive ditty ‘Prisoner To The Past’. The almost a cappella opening is more than a little depressing but when the folky rhythms kick in things do perk up a bit. There is a lyric video which is useful but it’s all a bit preachy and gloomy for my tastes so I’m going
to pour myself another port and gorge on cheesy footballs until they taste like copper coins.

This year’s crop is a bit like a gift bag from your nan, then, some rubbish, some stuff you’ll use and some things that will be in the bin before Christmas dinner is over. Charles Cave and Ciaran Lavery can share the wish bone and let’s all go loosen our belts to Dr Who.