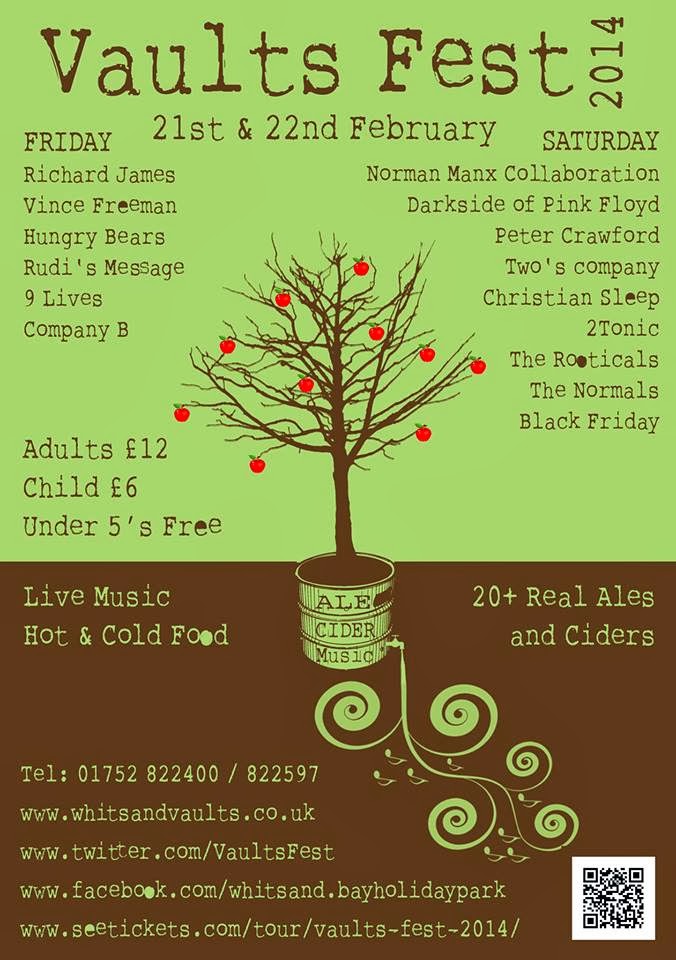 Due to my remote geographical location and my naturally lazy disposition, I don't get out to as many gigs as I would like these days. So, when an event offering two days of live music popped up just a couple of miles down the road it seemed churlish to ignore it. So, once work commitments had been met, I rocked up at the Whistand Bay Fort and strolled in to the old Vaults Bar which is part of a holiday park just in time to catch Vince Freeman taking to the stage with his band. Musically speaking, the trio were tight, accomplished and clearly enjoying themselves on stage. However, for me, the style was a little bland and the kind of songs you'd imagine on an X-Factor rejects album. Vince and the boys threw in a couple of covers including 'L.I.F.E.G.O.E.S.O.N.' by Noah and the Whale and Johnny Cash's 'Ring Of Fire' which peaked the crowd's interest but all in all it was a relatively forgettable set not helped by a distinctly washed out and subdued sound mix.

After a top up of the cloudy cider (yes, my head is hurting today) it was time to check out the Blues Rock covers band Nine Lives from Cornwall who started off sounding like a Thin Lizzy tribute band with a Roger Daltrey wannabe on vocals. Again, though, the sound let them down as you couldn't hear the vocalist or the lead guitarist above the rest of the band for the first half of the set. Nevertheless, the quintet ploughed enthusiastically through a set that featured songs like AC/DC's  'Hell Ain't A Bad Place To Be', Guns'n'Roses' 'Sweet Child O' Mine' and ZZ Top's 'Gimme All Your Lovin'' and the lead guitarist (the youngest of the bunch by a long way) played some great licks when you could hear him. As the sound improved towards the end of the set, plenty of air guitar was played along with set closer 'Highway To Hell' by AC/DC.

The main attraction for the evening could be seen preparing behind the stage with the slightly incongruous sight of seven men in 1940s American GI garb. These are the seven men of Company B, a troupe of Westcountry musicians who play Swing and Jive music that cannot fail to get your head bobbing and your leg twitching. With a mixture of their own compositions and covers like Louis Prima's 'Jump Jive & Wail' and 'Just A Gigolo', they got the crowd going without much effort and the whole joint jumping in no time at all. Their horn heavy version of 'King Of The Swingers' got all ages happily swinging along and I'm a sucker for big ol' double bass being thwacked live on stage.

As warm ups go, this was a pretty good for a first night and things certainly improved as the evening went on. I'll be back up for day 2 later, who's in?