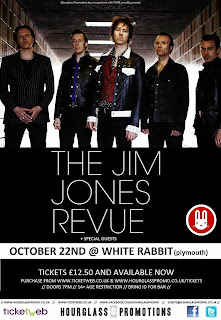 There is nothing better than walking in to a venue and being hit in the face by a wall of feedback and booming drums. Tonight's welcome chorus comes courtesy of Plymouth noise mongers Damerels and what a might noise it is too. Masters of feedback and the grumbling bass, Damerels warmed the room up nicely as the crowd arrived, moist from the wesctountry rain sweeping in from the sea.

Next up on the bill were brother and sister duo Joe Gideon & The Shark who I had only heard of rather than actually heard in the past. It is an absolute pleasure to report that this twosome were a revelation combining the spoken word elements of Jim Morrison, the quirky cool of Gryff Rhys and the delivery of We Are Scientists - and that's just Joe Gideon. Joe's sister, the Shark (Viva to her friends), is a twirling, whirling octopus-cum-mad-scientist of a musician as she switches expertly between microphones, drums, keyboards and loop stations all with the precision of a gymnast. There is something spell binding about their songs and their performance despite their almost complete lack of audience interplay. A more than pleasant surprise.

Something that wasn't a surprise was the ferocity, energy and swagger with which the Jim Jones Revue hit the stage. For the uninitiated, the London 5 piece play piano driven rock'n'roll with the sneer of the early Rolling Stones, the style of the Jon Spencer Blues Explosion and a stage presence these shores haven't seen for quite some years. As they sweated, growled and gurned their way the songs that have brought them popularity, it quickly became apparent that it wouldn't matter if you didn't know the tunes as the infectiousness of the performance and the primal rumble of the bass guitar mixed the lowest of the low notes on the piano forces you to get involved. After a short break - presumably so that the band could wring the sweat out of their shirts - the band returned to the stage and preceded to take requests from the audience and orchestrate a clap/stomp/shout/swear/sing along. It didn't matter that half the crowd didn't know the early stuff, by the time Jim Jones was leaning out from the stage we were all eating out of the palm of his hand as his band of rock'n'roll reprobates teased us, pleased us and generally did unholy things to their instruments. This is how a rock'n'roll band should sound live but, more importantly, this is how a live rock'n'roll band should perform and that is a big part of what makes the Jim Jones Revue so special.