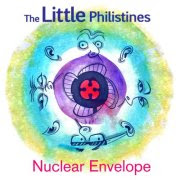 The recent Olympic closing ceremony celebrated the best of British pop music and pop culture as London 2012 took a final bow in front of the world’s eyes. Madness, Blur, Kate Bush and David Bowie were all present and correct with something for the younger viewers too in One Direction and Jessie “I wish I was Katy Perry” J. What Coe and Co really missed an opportunity to do though was showcase the future of great British pop music. Imagine a national battle of the bands with a prize of a 2 song set in the Olympic stadium in front of, well, THE WORLD! London quintet The Little Philistines would surely have won that battle and would have gone on to instant super stardom as a result. Instead, they will have to settle for a debut album full of finely crafted pop gems, the knowledge that they are excellent songwriters and a launch show at London’s legendary Wilmington Arms – not quite as glamorous but probably more credible than the Olympic closing ceremony.

Nuclear Envelope kicks off with the infectiously jaunty ‘She’s My Food’ showing off the bands multi-layered vocal harmonies beautifully and bringing to mind the more upbeat moments of Belle and Sebastian. Trumpets, Violins, possibly a Kazoo and Carry On inspired lyrics (“I treated you like a number two when you should be number one”) all make for a very British pop song and at 2 minutes 17 seconds it’s a perky start to the album! ‘Idiom Idiot’ is that curious beast of a song with a high-brow subject but a low-brow way of hammering it home to the listener but repeating two words over and over again – kinda like Tony Blair’s Education, Education, Education mantra that still echoes around the corridors of Westminster on dark evenings. It is quickly apparent that what the Little Philistines embody is that rare thing of a band of friends with no focal point, no egos but bags of collective talent. More interestingly though, this isn’t just the standard gang of lads, yob-rock but rather a University educated group of friends who write songs over a tasty risotto and a glass of rioja. Now there’s a piece of me that opposes music that comes from that background, it’s the teenage, rebellious, idealistic part of me that didn’t know any better but since I’ve seen more of the world I have realised that there is space in the world for a whole buffet of music. I mean, sure, we all want the sausage rolls, potato wedges and ham sandwiches but every now again it’s nice to change things up with a skewered chilli king prawn, an avocado dip or some shredded duck wraps with hoi sin sauce.

‘Pick Me Up’ starts with lyrics about getting a Twix from a vending machine but ends up sounding like the Arcade Fire and then ‘Hot Phone’ comes screaming in with a beefy pop chorus and multi-layered melodies to die for – it’s no surprise that this was chosen as a single and might benefit from a re-release after the exposure this album is sure to get. The malady of ‘Pigeon Shit Bridge’ is remarkable on two fronts; Firstly because it is one of the very few indie-pop songs to use a waltz rhythm and secondly because it possibly has more swear words than the Super Furry Animals’ infamous ‘The Man Don’t Give A Fuck’ as it tells the story of getting mugged for an iPod under a grotty bridge by some hooded rapscallions. The gentle, choral strains of ‘Burns’ is a soothing influence on the ears and would fit nicely on any of the early Shine compilations between Echobelly and My Life Story. ‘Hugo Says!’ would also be at home in the 90s Britpop arena with its catchy call and response chorus and choppy guitar lines. Final track and album title track ‘Nuclear Envelope’, however, wouldn’t sound out of place on a Maximo Park or Futureheads album with its literary references, eccentric arrangements and sumptuous harmonies.

So, to sum up, the Little Philistines as a band are a middle class, University educated, buffet of a band who bring great harmonies, ear-worm melodies and sophisticated lyrics to the table. For fans of the Young Knives, Hot Club de Paris, Luke Haines and Belle & Sebastian it is good news – the Little Philistines are your new favourite band and, who knows, if enough of you buy their album, they can play at the opening ceremony of Rio 2016 once they are on their third album and have developed an absinthe and laudanum habit to rival a Victorian lush.