There is a modern trend for artists to get an entire album syndicated for use on a range of advertisements (it started with Moby and now the Black Keys are taking over the world) but it’s rare that a band write an entire album with this purpose in mind. However, this is exactly what MFC Chicken seem to have done with their debut offering, Music For Chicken. Anyone from Chicken Tonight to Nando’s could use this music on superb advertising campaign but if I was a betting man, and I am, I would suggest that the MFC boys are aiming for the dizzy heights of Kentucky Fried Chicken stardom. You see, Music For Chicken is an album by MFC Chicken about chicken and boy is it finger lickin’ good!?

Lead by Canadian, Sax-toting, geek-throb  Spencer Evoy, MFC Chicken are a London based 5 piece who deal in pure, unadulterated, organic rock’n’roll in the style of Bill Hailey, Chuck Berry or Buddy Holly. Every detail is taken care of from Bret’s punchy bass lines and Alberto’s choppy guitars to Ravi’s rock solid beats and Parsley’s euphoric keys but its Spencer’s hollering, yowling and uh-huh-ing that gives this music such an authentic and infectious soul. From the opening yelps of ‘Chicken, Baby, Chicken’ your head will be nodding within seconds and by the time Spencer descends in to making animalistic growls you will be moving your whole body, no arguments. However, its on second track ‘Every Girl On The Tube’ that you start to notice the key difference between MFC Chicken and their forefathers. These gentlemen have managed to overlay modern day lyrical content on to some of the most authentic 60s garage rock’n’roll created since the days of Bryl Creem and drive-in movies. ‘Striptease Girl’ is a swampy Blues romp with Alberto taking over on vocal duties and the addition of some screeching harmonica. This is followed by one and a half minutes of ‘Wild Safari’ which can only be described as Adam West era Batman fight scene music – you know, when the ‘Pow’, ’Sock’, ‘Thump’ and ‘Phwoar’ bubbles pop up. ‘Laundramatic’, however, is a bona fide dance-along classic with the classic refrain “I’m telling you know you’re gonna be a fanatic, for a brand new dance they call the Laundramatic” and if you’re not moving to this record by now then I would either question the quality of your hearing or suggest that you are in some sort of ‘locked inside’ syndrome hell (sorry if you are by the way but, hey, what are you going to do about it?). 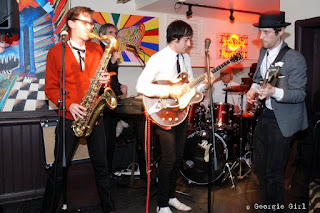 Essentially, what I’m saying is that MFC Chicken are the best party band on God’s green earth because they produce music so passionate, so authentic and so goddamn fun that they will get any group of folk dancing. If proof were needed, I can, hand on heart, tell you that I’ve seen them make a room full of Scandinavian Architects go coco for cocopuffs on a wet December evening in London town. True story. But what I’ve never fully appreciated about MFC Chicken is just how good they are at constructing a song around that positive energy. There’s always just the right amount bass, the guitar is always played in the right tone, the drummer knows just when a bit of tub thumping is needed to drive a song along and the keys are understated but oh so vital. Throw in some sexy Sax and you have the perfect recipe for a good time and all the time you are told just exactly how much fun to have by Colonel Evoy. ‘Wine, Women and Rock & Roll’ is the perfect example with a choppy guitar riff being matched every step of the way by blasts on that dastardly horn as we are spun a story about hard living, hard drinking and hard loving. Coming in to the home straight of this 14 track beast (generous for an album these days eh?) and you have the chugging delights of ‘Man Size Tissue’ which is either a love song or something altogether more unsavoury but I’ll leave that up to you. This is followed by ‘Family Value Meal (Music For Chicken)’ which is pretty much the band’s theme tune and would under the credits of their TV show if they had one (which they should by the way, kinda like the Monkees but in 21st Century North London). And so, to top the meal off like one of those unfeasibly large sundaes you only get in Happy Days, we are served up with the longest track on the album at a whopping 3 minutes and 23 seconds, namely ’57 Acres Of Pain’. This is a ball busting tune that builds to an immense crescendo featuring double hand claps, layers of organ and the kind of desperate sax playing that can surely only be produced by a frantic Canadian lying on his back in a puddle of his juices.

In short, I urge you to get your hands on this album (preferably on the beautiful vinyl version) and, more importantly, I urge you to get out and see this band live. It will improve your day, your week and probably your life and if nothing else you well sweat the sweat of someone who has danced because they HAVE to not just because they want to. Don’t worry though, every portion of MFC Chicken comes with a handy lemon-fresh towelette to clean yourself off with and boy will you need it!

Get the album on CD, LP or Download at:
Dirty Water Records