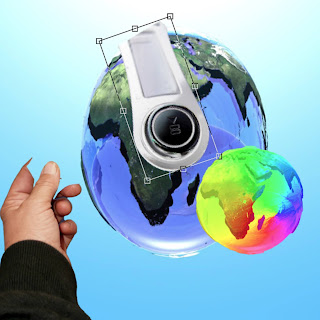 Release Date: Out Now
There is an awful lot going on with this album, the debut release from duo Push Baby, so I was grateful (for once) that the press blurb contained a bit of a walk through from the artists themselves. I mean, it's quite alright to start an album with the title track ('Wow, Big Legend' in this case) but when that track is 89 seconds of sinister soundscape with the voice of Eamonn Holmes introducing you to what is to come like the safety announcer on Willy Wonka's most terrifying ride, well, you know you're in for something a little bit different.
The album proper kicks off with 'ROMANTIC GARAGE', introduced by some gorgeous close harmony singing provided by none other than the Nolan Sisters (relatives of the band, no less) before sprawling out in to a skittish but infectious alt-pop banger. 'Man In His Bedroom' is perhaps my favourite track on the album because of its lo-fi, confessional spoken word vibe that feels like the Streets meets Man Like Me in the best way possible. 'That Boy' is described as sounding like a badly recorded One Direction B-side which I think does a disservice to the personality, tenderness and creativity that seeps out of every pore of this track.
The acoustic strum and wonky melodies of 'Wanna Go' are pure lazy summer days while 'Claire from Ohio' has a 90s big beat vibe but with that trademark wooziness in the background that changes the energy completely. 'Cry/TALK ABOUT IT' is the single that made me fall in love with Push Baby and its still frustratingly brilliant as it touches on the edges of absolute bangerdom before pulling away like a cat getting too close to candle. There are so many ideas and directions contained within this album and the beauty of it is that it is largely unfiltered by any marketing company or those 'in the know' so you get a real feel for what Jack and Charley are trying to create. 'Coming Over' is a great example of this as a late night confessional morphs in to a city cruising night time chill anthem.
As we approach the home straight we get 'Wasted Love', a soulful song that is probably the biggest flirtation with the mainstream, before 'Aegean' drops an unexpected dose of sweetness and tender love with a tinge of regret to it. On 'Wishing We Were More Than Friends', the duo do their take on McFly before the album closes with 'Holdin On Is Holding You Back', a Jamie T meets Collapsed Lung inspired jam that takes the record industry on but also features a stream of consciousness spoken word rap that is incredibly uplifting. Push Baby are a band that have flirted with fame (they were formerly Rixton for those paying attention) but have circled back and this time chosen a path of authenticity and creativity which is better for them and for us so get involved and let the ideas wash over you.
More information: https://www.facebook.com/pushbabymusic