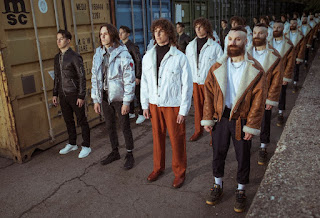 Well, this is a bit of a mind melter. Luton’s number one sons, Don Broco, are releasing ‘Manchester Super Reds No. 1 Fan’ and the whole experience is like listening to your stoned mate trying to tell you what happened last night – “There’s this spaceship and a rock band and they want to clone David Beckham but it doesn’t really work and there’s a rock band. Did I mention the rock band?” The thumping drums and searing guitars build the tension as the Jamie Lenman-esque vocals get ready to erupt – and then rap. Dressed as the crew of a knock-off Star Trek show. There’s a lot going on here but it works and I can’t recommend it highly enough. I really want a doobie now though.