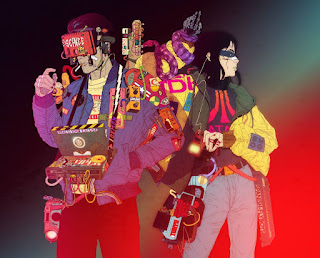 Faceless Mancunians Overrider definitely fall in to the unique catogery but that doesn't always mean this is going to be a good tune. Fortunately, 'Sisyphean Overflow' is a masterpiece of dark, dystopian, industrial electro music which could easily have come out of the late night meanderings of Matt Bellamy or Trent Reznor. There's a real cinematic feel to this as though it has been plucked from a Bladerunner soundtrack but one where things take an ever darker turn and everyone turns out to be descended from an evil toaster. The explosion in to a rock track is something that you'd expect from Jamie Lenman but on this it comes as a real surprise as the burst of energy really shakes you out of the nightmare. Really, genuinely, masterful stuff.