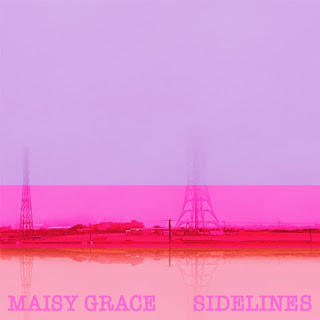 So here it is, the debut EP from highly promising Cornish singer-songwriter Maisy Grace, 'Sidelines'. This is a four track collection that highlights the burgeoning talent that is slowly but surely starting to make people sit up and notice. The EP opens with the uber-laid back and soulful former single '5 Minutes' that still floats as easily and airily as ever with its later afternoon vibes and super chilled beat. 'Living It' follows with a similar energy but a darker tone as Maisy Grace's guitar work glides between folk, pop and noir, allowing her breathy vocals to sail effortlessly by.

The drums and bass combo on 'Until We Meet Again' steps things up a notch and shows a different side to the songwriting of Maisy Grace, embracing a more alt-pop vibe whilst still keeping that vocal style and sprinkling in some intoxicating melodies. The EP finishes all too soon (always leave them wanting more) with title track 'Sidelines' showing the most exciting element of this collection as we are treated to something that exists between Kimbra, the XX and Laura Mvula in a magical and unexplored space. As you might expect, I get sent a lot of music from singer-songwriters but rarely do I get sent music imbued with such creativity or such confidence of style. Spell binding.