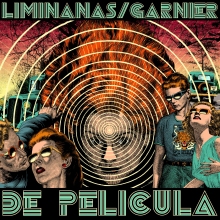 The collaboration between psych rockers The Liminanas and DJ/Producer Laurent Garnier is not one I was expecting in 2021 and the quality of the collaboration certainly took me by surprise but once you get over that, you'll be able to enjoy this album as much as I do. 'De Pelicula' is 12 tracks of sublimely stylish music with a big ol' bag of influences so if you're up for a bit of a trip then hop on and let's go for a ride.

We get started with 'Saul', a track best suited to a French detective movie with it's mysterious and sinister guitars matched by the insistent tension of the beats and the french spoken word vocals. 'Je Rentrais Par Le Bois' is up next with a persistent riff and Keith Moon-esque beat of never ending energy that puts me in mind of a full blown LCD Soundsystem wig out. The beautifully titled 'Juliette Dan La Caravane' has a more laid-back groove to it without losing that retro energy before 'Tu Tournes En Boucle' goes deep underground and takes to some, frankly, pretty dark places.

'Promenades Obliques' is perhaps my favourite track on the album as it builds so magnificently in to something between the Chemical Brothers, the Allergies and Lemon Jelly with a triumphalism so rarely seen or heard these days. Recent 'Que Color' is still as vibrant and intense when I first heard it while 'Juliette' acts as a distinctly uncomfortable duet of sorts like a girl chatting you up on the last bus which you find creepy but also she's pretty cute.

'Ne Gache pas I Aventure Humaine' has a beautifully lo-fi vibe to it with the raw drums and synth drones being overlaid and layered up to devastating effect. Meanwhile, 'Steeplechase' starts like 'Wipe-Out' being played in the reception area of the offices of Satan before a rave-meets-psych boxing match kicks off in the lobby. There is no escaping the fact that this album is more than a little nuts but it is so much better for being let off the leash in creative terms. The formatting of the track names and my fading memory of GCSE French has been a challenge on this review so apologies if I get the next title wrong but I think it's 'Au d'but c'tait le d'but' - whatever the title, this is a heartbroken stumble through the late night streets of loss, unrequited love and despair in the way only the French can do.

'Saul s'est fait Planter' is a six minute meander from the hotel lobby with a pair of high heels dangling from a tired hand and a single rose tucked behind the ear. The title track, 'De Pelicula', closes the album off and we're back in that LCD Soundsystem space again but with more flair, more passion and more..... je ne sais quoi. Apparently, this is a collaboration borne out of the chance playing of a ringtone and, if that's the case, then it is yet another perfect moment of serendipity in the history of rock'n'roll.