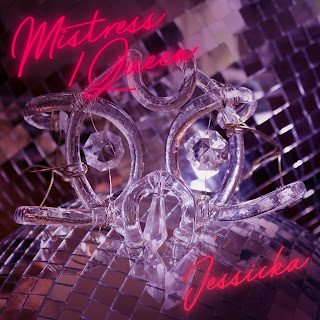 A six-track electro-pop EP from Canada's Jessicka might be just what you need right now but even if it isn't, it's almost certainly what you want. 'Mistress/Queen' lures us in to its dark world with opening track 'Mistress' that is sparse and detached but still alluring as the processed beats and woozy atmospherics allow Jessicka to sing her siren song. Recent single 'Gold Jacket' comes next with a more upbeat disco vibe that suggests we've stumbled in to a member's only club where everyone has to wear a gold jacket and an elaborate mask to hide their identity.

On 'Queen Slay' the energy stays high but with that slinky, sultry feel that brings Kylie or Goldfrapp to mind which is never, ever a bad thing. One of my favourite song titles for a long time, 'Mirrorball Midnight', introduces a song that throbs and undulates with primal electro energy - perfect to lose yourself to before the clock strikes twelve and your cab turns in to sushi. Penultimate song 'I Hear You Calling' feels like it was plucked from a platinum selling dark pop album such is the slick production, polished structure and dark tinged radio friendly sound. Jessicka's vocals have been as one with the rest of the music in the mix until final track, 'Hollywood Love Song', which is far more confessional and finds our heroine sitting on the steps outside her apartment as the sun comes up and the mascara runs down her face. The imperfect end to the perfect night.