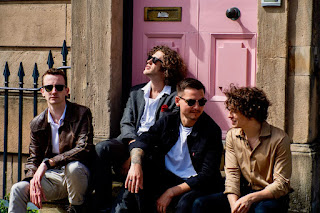 Never before has an anti-government song sounded so upbeat and anthemic but then MiG 15 aren't just any old band. The Liverpudlian four-piece release 'Too Little Too Late' as a lyrical critique of the current Conservative government in the UK but don't go expecting an Billy Bragg-isms here. No sir, you'd be better advised to expect a sound akin to the Killers performing a song penned by the Editors with Bruce Springsteen behind the mixing desk. There's scope for an artistic video documenting the state of the nation to accompany this from the homelessness problem, the NHS being on its knees and the disparity of wealth but that's another story for another day. For now, plug this one in to your veins and it might just give you the energy you need to get up and fight for one more day - because one more day is all it takes sometimes.