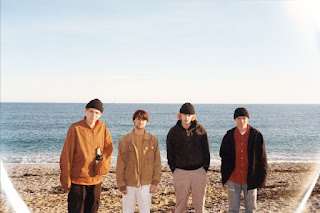 Joining the ranks of highly promising artists to come out of Cornwall, quartet Facepaint are announcing themselves on to the world with new single 'The Reaper'. The track itself starts in a flurry of electronic excitement before settling in to slacker-indie-pop pattern that would fit in alongside Hippo Campus, Lauran Hibberd or the Dandy Warhols. But there's something else here, something far more unhinged. The likes of Super Furry Animals, the Flaming Lips and Eels come to mind with the changes of tempo, direction and energy and when you put all those influences together in one pot then you get one hell of a gumbo. For a song about trying to escape the humdrum of the 9-5, this song has a huge amount of imagination and creativity going on but, then again, that's what the Cornish music scene offers at the moment - the unexpected.