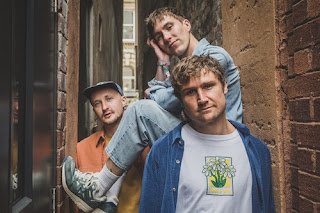 Release Date; 19th July 2021
The rise and rise of Exeter trio Pattern Pusher continues with superb new single 'Find the Light' and its tense funk vibe. Powerful soul-pop vocals, a fraught guitar line, lush keys, pumping bass and driving drums create a real sense of energy and desire in this song which makes you want to get up and do something. When the strings come in the uplift hits you then you know it's time to take a breath, stand up and make it count with everything you've got. Pattern Pusher have such talent for bringing the positivity to the fore that I think you need them in your life whether you like the music or not - they're just good for your soul. There are a bunch of summer live dates ahead of a debut album so it's time to throw open the windows and let Pattern Pusher in (not literally, that would be weird. Especially if you live in a high-rise or a light house).
More information: https://www.facebook.com/patternpusher/
Live Dates:
30th July - Rock Oyster Festival, Saint Minver
13th August - Boardmasters Festival, Newquay
20th August - Lula Shack, Hayle
25th August - Adam Isaac & Friends, Sutton Barton
27th August - The Great Estate Festival, Scorrier
2nd September - Whiskers, Newquay
3rd September - Bosfest, Burnham-on-Sea
4th September - Shebfest, Beaworthy w/Ash + Republica + more
5th September - Festival of Beer, Buckingham
18th September - Hog's Back, Tongham
19th September - How the Light Gets In Festival, London
25th September - Loft Live Sessions, Ide w/Will and the People
25th October - Boiler Rooms, Guildford w/Goan Dogs
2nd November - Paper Dress Vintage, Hackney
13th November - Cavern, Exeter