Sophie Ellis-Bexter – Crying at the Discotheque 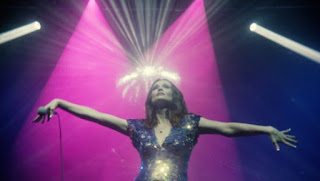 Sophie ‘Queen of Lockdown’ Ellis-Bexter has been in some quarters of making the most of the pandemic in terms of giving her career a boost but to those quarters I say chill out and enjoy this for what it is. Ellis-Bexter’s new single ‘Crying at the Discotheque has been buzzing around on the airwaves for a while now and getting everyone dancing around their kitchen with it’s mix of disco, pop and quintessential English charm. Ever since her days in underrated indie band theaudience, Ellis-Bexter has been one of the coolest customers out there but she’s having fun now too and that comes through in the music but also in the excellent video which I want to talk about. To raise some awareness for the #WeMakeEvents campaign which is doing such excellent work to try and support everyone involved in the music and wider events industry during these difficult times, Ellis-Bexter filmed the video in some of the currently empty venues of London town. Places like Bush Hall, Clapham Grand, Omeara and Apollo Theatre get a rare outing and it’s heartening to see established artists remembering where they came from.