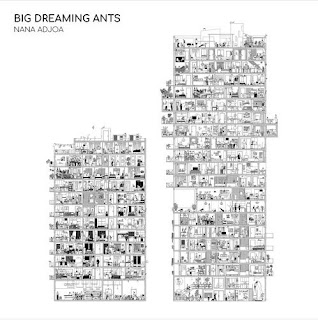 Ever since I first heard Nana Adjoa’s music earlier in 2020, I had a very clear understanding that I was listening to something and someone very special. After a couple of singles it is already time for us to delve deeper in to the world of the Amsterdam based musician so I invite you to join me on a trip through her debut album, ‘Big Dreaming Ants’.

The album begins with ‘National Song’ and a sound that transports me back to a childhood that I never had with woozy synths giving way to bombastic drums that lumber in with steady inevitability. As the song unfolds and you remember that this is the opening track on a solo artist’s debut album you would be a cold-hearted fool not to be thoroughly impressed to the point of being gob smacked. ‘Cardboard Castle’ is the first hint that Adjoa has had a listen or two to the later work of Radiohead with moody bass notes and off-kilter beats creating a dark bed for her luxurious voice to unfurl across. It’s as impressive an opening brace of tracks as you’ll find on any album in 2020.

On ‘Throw Stones’ there is a lighter vibe with a playful acoustic melody and a sing-song vocal line that catches you off guard with its simplicity and instant hook. The single ‘No Room’ was the first track of Adjoa’s that I heard earlier this year and it’s just as arresting an experience as it was the first time while ‘In Lesser Light Pollution’ has a late night, buzzy vibe to it that it’s hard to place but easy to fall in love with. The ethereal and woozy vocal harmonies that form the basis of ‘Every Song’ remind me of Seaker with sparse beats clattering in the background and helping to create an uneasy but enthralling ambience. The mellowness continues on ‘Love and Death’ but a rippling and subtle bassline gives this one a pulsating energy that lives just beneath the surface and threatens to burst through at any moment. Nana Adjoa has already mastered the art of keeping the listener hooked with subtle shifts and changes without ever overegging the pudding and that’s something that evades the careers of many a musician.

The final third of the album gets going with ‘She’s Stronger’ which kicks the energy up a knotch with a cool, Christine and the Queens-esque slice of sophisticated indie-pop  delivered with near-whispered vocals that draw the listener in. ‘Who Do We Look to Now’ shows off Adjoa’s more soulful vocal side which is there for us all to luxuriate in as the layered synth melodies build up and wash over you. The final track is ‘I Want to Change’ and if you can find a more uplifting and life firming end to an album on the current scene then you’re either a liar or I haven’t heard it yet. Both are possibilities. Anyway, the main thing to take away is that not only is this an astounding debut album, but it will surely be up there in the ‘best of 2020’ lists alongside more established artists as well. Stunning stuff.