LISTEN WITH MONGER AWARDS 2018 – THE WINNERS

The votes have been counted, the bungs have been handed in and the snitches have been paid off. As a sign off for an outstanding year of music, here are the winners of the 2018 Listen With Monger awards:

BLACK FUTURES – the enigmatic duo have mustered some great singles, impressive videos and the kind of festival performances that will have people asking ‘were you there?’ in years to come. If the future is as bleak as the media would have us believe, Black Futures are the band we all need to see us through and soundtrack our Mad Max existence.

THE VELVET HANDS – Cornish garage-rock outfit the Velvet Hands released their much-anticipated debut album to much acclaim this year, the live shows have been off-the-hook and they are now looking longingly out from Cornwall towards the USA over a pint of cider. Hang on to their coat tails folks.

THE NECTARS – New York quartet the Nectars burst on to the scene with their debut album this year and it was a burst of sugar fuelled air punching you in the face. The whole album is less than 30 minutes long and then they hit the UK like a group of GIs before the big push so expect more. Much more.

JOSHUA KYEOT – Here we have a man with passion, great song writing ability and, to cap it all off, the kind of voice that could stop a rabid mob in their tracks. The journey is just beginning for KYEOT but he already at the top of the pile – frightening for the rest of you.

MATTHEW GORDON PRICE – Having made a name for himself as an excellent solo musician, MGP is now fronting his own band, managing others and generally leading the charge of a gaggle of musicians bubbling up from the Plymouth scene to take over the world – or at least win your hearts.

SIMON LYNGE – Greenland’s finest solo artist released an album of supreme beauty this year but also put his country firmly on the musical map which is no mean feat. Artistic creation and ambassadorial duties at the same time? I think that’s worth an award, don’t you?

PIP HALL – 2018 was the year that My Little Empire records signing Pip Hall moved from insanely talented teenager to genuine and acclaimed solo artist with a career stretching out ahead of her. With an excellent label behind her, there is a strong chance that Hall will get the chance to explore her musical ability without being rushed and that’s worth its weight in gold.

JOANNA COOKE – Now I have a hard and fast rule about no artist winning the same category twice but Joanna Cooke won the Best UK Female artist category back in 2016 so technically this is different. Also, it is hard to look beyond Ms Cooke this year following an exceptional EP release and another phenomenal gigging year. She’s going to have to pull out her A-game to get the hat-trick and win the international award next year though.

GRACE INSPACE – American soloist Grace Inspace created one of the most unique and refreshing collections this year with her EP and she is only just beginning her journey so I’m getting in early with this one. Her Twitter handle might suggest she is Lazy Grace but if this is lazy then I pity the competition if she gets a work ethic.

X AMBASSADORS ‘JOYFUL’ – The gospel choir, the blind man on piano, the soul piercing vocals and the crunching percussion of this song emotionally winded me the first time I heard it. Now I go back to it on a weekly basis for a top up of a song that is full of joy and genuinely uplifting at a time when the world needs music just like this.

JONES ‘NEW YORK EP’ – This was such a hard category to call but my decision was made by complete addiction to this EP when it was first release. Jones has a beautifully clear voice full of soul and pathos, she has an ability to write hooks that get you instantly and there’s an unerring sense that she might just become bigger than she ever imagined.

THE NECTARS ‘SCI-FI TELEVISION’ // HENGE ‘ATTENTION! EARTH’ – I tried so hard to be decisive this year but the album category has got me split again. On the one hand, the urgency and direct approach to melody from New York quartet the Nectars on their debut album was just irresistible and incredibly moreish. On the other hand, the sprawling, meandering madness of the Henge album was the perfect antidote to the depressing inevitability of reality. So, it’s your choice, direct and urgent or sprawling and meandering. Either way, you’re covered.

CALVA LOUISE – ‘TUG OF WAR’ / LIBRALIBRA – ‘TONGUES – The Calva Louise entry was a late play for the award but a strong one as the excellently shot back street Olympics that accompanies ‘Tug Of War’ is worth watching on repeat even if the tune isn’t any good….but it is, it’s blinding so it’s the complete package. Brighton young bucks LibraLibra, meanwhile, took inspiration from Sia and bubblegum David Lynch scenes to create the mesmerising visuals for ‘Tongues’. It’s a tie and I’m not even sorry. 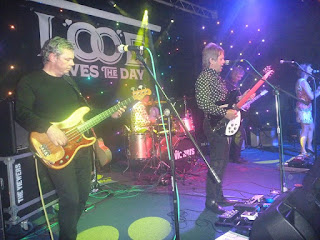 LOOE SAVES THE DAY FESTIVAL, LOOE – It’s hard to look past a festival that was created in a matter of weeks to save the end of the summer when its processor hit the wall. Aside from the excellent performances from the likes of the Viewers, Charlie Louise, Wille Edwards and so many more, Looe Saves the Day had the spirit of music and the community of Looe at its heart.

GEORGIA FEARN ‘PERFECT ON PAPER’ – So many excellent debut efforts but the first album by Welsh teenager Georgia Fearn was genuinely breath-taking from a performance point of view but also due to the sheer creativity involved. I am hopeful that this is the start of something bigger but as the first album to be crowned ‘Debut of the Year’, this is already pretty damn special.

IDLES – A fantastic new album, incendiary live shows, songs with messages and a performance that left Jools Holland twitching nervously in his suede loafers – this year belonged to Idles. An international tour beckons in 2019 and it’s just a matter of whether their fire burns brightly and briefly or strong and long.

HAVE YOU EVER SEEN THE JANE FONDA AEROBIC VHS? – Another strong year on the band name front but squeezing Jane Fonda, aerobics and the ancient concept of VHS is impressive by anyone’s measurements.

FINE COMPANY – For a new kid on the block, Fine Company have made some big strides this year. Set up by Tasha who helped further the careers of Sia, Dua Lipa, Clean Bandit, Lana Del Rey and the Libertines in a previous incarnation. With her own agency, Fine Company, Tasha is now helping bring the music of Whenyoung, Chloe Howl, Angus & Julia Stone, Jones, Kwassa, Nono, Theia and San Cisco to your ears and for that we should all be grateful. It’s been a hell of a year.

INTEGRITY RECORDS – They might not be the biggest or most well-known label but Integrity
work carefully and closely with their hand picked artists. This year, the two core releases from Simon Lynge and Malmo were well timed and had huge impact – both artistically and commercially. This is a label that, in the past and present, has brought us music from Mannequin Death Squad, Ghosts of Social Networks, Horse Party and Reuben back in the day so you know this isn’t a fluke.


LISTEN TO ALL THE WINNERS ON THE SPOTIFY PLAYLIST AT:

Engel & the Mountain People – Kings of a Strange Land Release Date: Out Now
Plymouth based indie-folk collective Engel & the Mountain People are back with new single ‘Kings of a Strange Land’ and it is a thing of natural, organic beauty. A gentle but urgent strum with a hint of Fleetwood Mac about it gets things going before the smoothly unassuming vocals of Luke Engel joins in. A beat picks up the pace like a horse galloping across moorland with some urgency and before long we’re transported to the strange land of the songs title on a magical, mystical journey. Throw in some genuinely engaging lyrics, an uplifting vibe and the kind of energy you might expect from Mumford & Sons or Passenger, and you’ve got something that really stands out in the slew of current releases and for all the right reasons.
More information: https://www.facebook.com/EngelandtheMountainPeople/
Download Here: https://engelandthemountainpeople.bandcamp.com/track/kings-of-a-strange-land?fbclid=IwA…