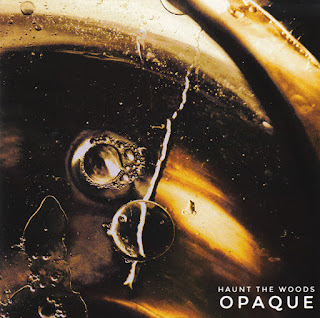 As storm Jorge ravages the Cornish coastline and a leap day swings in to view, it seems only fitting that an epic new record is birthed into the world – it will be the stuff of future legends. For those not in the know, Haunt the Woods are a four-man collective from the Rame peninsula in Cornwall and from such wild surroundings they have brought us this debut album, ‘Opaque’. The collection opens with a 30 second ‘Intro’ which is essentially a crescendo of static and noise leading to the calming tones of the opening track proper, ‘Elephant’. You’d be forgiven for thinking that this was going to be a ponderous folk album but the eruption into a Buckley meets early Muse chorus is truly breath-taking and there’s no looking back from this point onward.

‘Amethyst’ settles into a steadier rhythm but loses none of the intensity as the guitars ping and bounce around – a quality that will sound spellbinding in a forthcoming gig which they’re playing in a large cavern in deepest Cornwall. On ‘The Earth is a Rock’ the band explore their Syd Barrett era Pink Floyd tendencies while ‘Architecture’ soothes even the most savage of souls which is handy considering this is a song dealing with the death of relationship. There’s a Fleetwood Mac vibe to ‘Red’ which oozes class and is perfect for the mid-set wind down as the band schmooze the audience with their licks and cool beat. That Jeff Buckley influence is back on ‘Brother’ which, accompanied by the rich vocal harmonies, makes for a luxurious listening before recent single and, frankly, personal favourite ‘Supernova’ blasts into space with dramatic and earth-shattering effect. 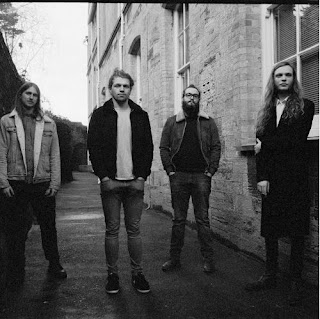 I can honestly say that I can’t remember a debut album that has struck me as so exploratory, ambitious and accomplished which is not only high praise, it is also genuinely impressive. Take ‘Fly’, for example. Here we have a track which opens with some sad, silent movie piano lines and a pure, unadulterated vocal and continues in exactly that vein through a beautifully jaunty lament – how many artists would that on with their debut. ‘Vultures’, by contrast, brings the whole band together on an expansive track that speaks of the Cornish landscape and dramatic vistas in the way county cousins Raikes do so well. The vibe on ‘The Box’ is more one of reflection but a shuddering and glorious chorus shakes the reverie before title track ‘Opaque’ does a great job of lulling you into a false sense of security before blasting your misconceptions out of the water.

This debut album from Haunt the Woods finishes on the simply titled ‘Feel’ which is perfect for ending a collection of tracks as it switches between humble piano based verses and the kind of chorus that could fuel a small country if you connected the leads properly. These four guys have taken their time, honed their craft, grown their hair and become greater than the sum of their parts in the most organic, elemental and powerful way I can imagine. This is the kind of album that any band would be proud to make and one that will stand up to numerous repeat listens if you have the inclination….and you really should.

Scaramanga – Simple Love  Release Date: Out Now
Oh, how I love this tune. Glasgow duo Scaramanga (more bands should name themselves after Bond villains) have captured everything I love about electronic music on their debut single ‘Simple Love’. There’s the soul of Human League, the deadpan delivery of New Order and Electronic, the frenetic energy of Chemical Brothers and mixed in with the melodies of the Lightning Seeds just to keep this from being too far left of mainstream appeal. The melody is simple but hooky, the beat doesn’t quit and, wait for it, there’s only a bloody fade out ending. Love it, love it, love it.
More information: https://www.facebook.com/Scaramanga-band-111578030315034/

McHifi – Bunker To Bunker (Plastique Recordings) Release Date: Out Now
The press picture might suggest a couple of Sunday league managers watching their team lose for the twelfth night in a row but this is, in fact, something of a supergroup. McHifi is the new vehicle of David McAlmont of McAlmont & Butler and Hifi Sean of the Soup Dragons and ‘Bunker To Bunker’ is their debut release and it’s a moody little number. McAlmont’s trademark vocal soars as free as a bird through skies cleared of vapour trails and pollution but this is paired with processed beats and swathes of electronic melodies that keeps this anchored in an industrial world. Nevertheless, the layers of melodies do create a sense of soul and hopeful beauty that it’s hard not to fall for.
More information: https://www.facebook.com/mchifi/
Watch the Video:

Dakar Audio Club – Dancing in the Moonlight
Release Date: 26th June 2020
I was slightly worried that this was going to be an ill-advised cover of the song that Toploader butchered back in the 90s but, fortunately, ‘Dancing in the Moonlight’ is an entirely original composition. Exeter based multinational collective Dakar Audio Collective blend their trademark Afrobeat melodies and rhythms with some glorious guitar work and subdued but hypnotic vocals. As ever with this lot, it’s hard not to get swept up in the energy of the song and if you’re not feeling the urge to dance barefoot on grass by the end of this then something has become dislodge between your brain and your ears.
More information: https://www.facebook.com/dakaraudioclub/

Matthew Gordon Price – Arrows  Release Date: 3rd July 2020
The mercurial troubadour Matthew Gordon Price is back with new single ‘Arrows’ and a real sense of hope, optimism and decisiveness. The Plymouth based singer-songwriter finds a bouncy rhythm on the acoustic guitar and shuffled percussion over which he lays his smooth and assured vocal. This is a song about choosing your own path, pulling away from following someone else’s route and generally feeling free for the first in forever. This is the kind of track that will pull you out of your funk, make you throw open the curtains and take on the world with a sense of quiet determination and we all need songs like that in our playlists, don’t we?
More information: https://www.facebook.com/MatthewGordonPrice/

The Good Manners – High Roller  Release Date: Out Now
Awoooga, Awooga, Awooga. New favourite band alert people. The Good Manners are an exceptionally funky duo and their new single, ‘High Roller’, is an absolute banger so listen up and listen good. Lively percussion and keys with Stevie Wonder sized chops get this going before uber-chilled vocals join in and we are off. Pitch this somewhere between Patawawa, Elevator Suite and the very best of old-skool Jamiroquai. If you need a track to get you in the mood for a party or to take your BBQ up to the next level then ‘High Roller’ is the track for you. You’re welcome.
More information: https://www.facebook.com/thegoodgoodmanners/